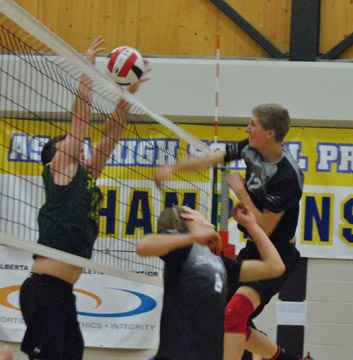 Photo by Jamie Rieger - Jonathan Dekker fires the ball past the Ecole Mallaig front line in the gold medal game on Saturday.

By Jamie Rieger
The Senator Gershaw Gators boys’ team chiseled their way through the 1A provincial volleyball championship held in Bow Island over the weekend, working until they advanced to the gold medal game.
The game against the Ecole Mallaig Stingers was fought hard by both sides of the net, but it came down to a single play that decided the outcome, with the Stingers winning over the Gators and capturing the provincial title and the Gators taking the silver medal.
Coach Andy Phillips said the team worked hard throughout the season and were on a constant path to improvement.
“We peaked at the right time and all of our hard work came to fruition,” said boys’ coach Andy Phillips, who also said the team had been improving steadily throughout the season.
“I have been coaching now for 10 years and this is the most improved I have seen in a team that whole time.”
The girls team, while fighting equally hard, were outmatched and were eliminated from the competition on Saturday morning.
With games being held at Senator Gershaw and Cherry Coulee Christian Academy, the host Gators had tremendous support from students, staff, and community members to host the event that saw 20 teams and more than 400 athletes competing.
“We are very appreciative of all the volunteers who helped out,” said principal Scott Angle. “We had 50 students and 20 committee members, plus countless more volunteers who really came through.”