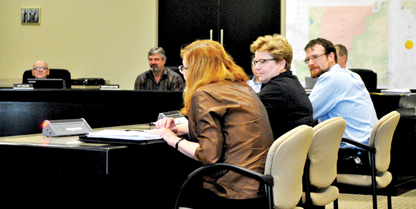 Water was very much on the mind of Cypress County councillors last Tuesday during their regular bi-weekly meeting. With developers being held up in the County due to a shortage of water licences, councillors were eager to have Kathleen Murphy, ERSD water approvals manager for southern Alberta, and two of her colleagues come before them to answer some questions.
Councillor Garry Lentz put the situation succinctly to Murphy in his opening statement.
“A few years back Cypress County had the chance to buy some additional water rights at a reasonable price and in fair quantity. We were going to use it for future development. Our request was denied by Alberta Environment and we were told to come back when we need it. Now we need the water and we’re having problems getting water rights,” said Lentz.
Murphy explained the reason why water rights had previously been denied the County.
“We don’t issue licences or allow transfers unless you can actually show the need for it, a bonafide need. Municipalities and irrigation districts are a little different in that we do allow for an allocation to be issued for a ten year projection on what your water demand will be. What we cannot do is issue licences for some of the speculatives.”
Councillor Darcy Geigle told Murphy the situation had changed since their previous application with a new $15 million Dunmore-Irvine-Walsh water pipeline set to be completed in July of 2015. The County has built the necessary infrastructure to carry water to two new housing developments along the pipeline’s course, but does not yet have the water licences necessary to meet those developments’ needs. Geigle was concerned about the amount of time it might take to procure new water rights, have the application reviewed and secure the necessary approvals.
“The need has overtaken our water licence,” stated Geigle. “And now we are in the dilemma where we have to wait a year and a half just to find out if (a deal on water rights with a property owner) is in good standing or not.”
Donna McColl, ERSD senior water technologist, explained that the reason the process was so slow was because the Alberta government has made it a priority to deal with outstanding flood claims from 2013 above other areas. She is short staffed in processing water licencing and water rights transfer agreements.
She went on to add applications coming in are dealt with on a first come, first serve basis. However, she could flip applications in the cue if they applications come from the same applicant. And this has happened in Cypress County’s case. She was asked to flip the Hilda-Schuler water licencing application, which has been in the works for several years, with the Dunmore-Irvine-Walsh application. This means the Dunmore-Irvine-Walsh claim is now next in the cue in southern Alberta to be dealt with.
“With respect to that actual transfer, it’s going to be able to be expedited now that I am in a position to deal with it,” said McColl. “Because we have done this once before with the County, the application for Hilda-Schuler is resting near the bottom of the list because there was a request that came from the County to please flip because we need to get water to Irvine-Walsh.”
McColl went on to state given the County’s demonstrated need along the Dunmore-Irvine-Walsh line she did not anticipate the County’s request for more water being denied. She added, however, delays could come in other ways.
“The hold up isn’t always necessarily on your end. A lot of times what I have found over the years is the hold up is because the person who is going to transfer the licence to you, the licence is found as not being in good standing,” explained McColl.
With the likelihood of the Dunmore-Irvine-Walsh application being accepted, the conversation switched to questions about the geographic area and river systems the County could buy licences from if they become available.
“We are looking for a connection between the transferee and the transferor,” explained Kathleen Murphy. “So if you have a water licence on the upper Oldman system that you can show you want to transfer downstream to the Medicine Hat intake, that can be done. Same thing on the Bow. So that can be done and has been done in the past.”
Murphy also confirmed water rights could be bought from as far away as the St. Mary Irrigation District, or even Waterton Valley, if a deal with local rights’ holders could be reached.
“If you found a private licence you can do that if they are willing to transfer to you. You can also talk to the St. Mary Irrigation District. If they are willing to transfer part of their allocation, they can. The Waterton Valley is also tributary to the Oldman basin,” Murphy said.