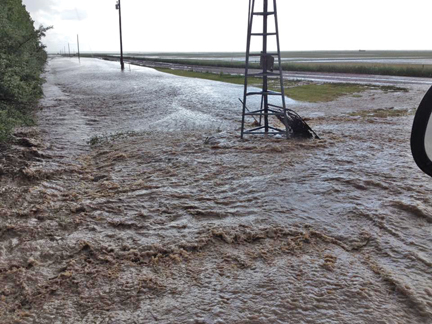 PHOTO SUBMITTED BY STEVE WIKKERINK - A storm that darkened the skies north of Bow Island last Thursday gave farmers a lot more precipitation than they were hoping for as four inches of rain fell in 45 minutes.

By Jamie Rieger
A fast-forming storm that blew through north of Bow Island on Thursday afternoon dumped more rain than the farmers were wishing for.
Steve Wikkerink, who had some damage in his fields, said the storm dropped approximately four inches of rain in 45 minutes.
“Once the storm jumped the river, it really started pouring. There have been some good washouts and a couple of roads that were temporarily closed,” said Wikkerink. “One road east of me is going to be closed for about a week. Part of the road was undermined and there was still water running through hours after the storm had passed.”
It was not just the roads that sustained damage from the downpour, which also included some pea-sized hail.
“I had some of my beans partially washed out and there are some fields buried in silt or straw,” said Wikkerink, adding that he had a 30-acre slough in his beet crop.
At the time the storm was passing through, a lightning alert had been issued by Envirnment Canada because of two strikes north of Bow Island, but there was no advisory issued about the storm itself.