Hyland stepping down as PEP chair 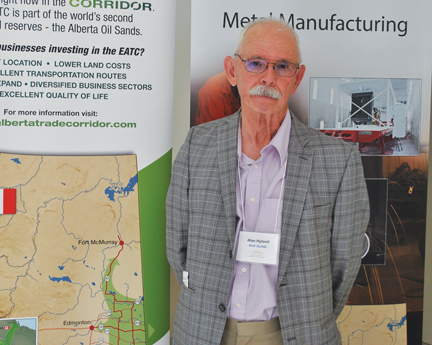 Alan Hyland, long-time chair of Palliser Economic Partnership, announced at the organization's AGM on Friday that he would be stepping down from the position.

By Tim Kalinowski
During Friday’s Palliser Economic Partnership (PEP) annual general meeting long-time chairman Alan Hyland of Bow Island stepped aside to make way for new leadership.
Hyland has served as chair of the regional organization since its inception 14 years ago. Hyland was replaced by former Special Areas board chair Jay Slemp, who won election over Medicine Hat city councillor Jim Turner on Friday. Turner will sit as vice chair instead.
Hyland has been battling health problems in recent years, and he felt now was a good time to make way for new blood in the chairman position. He said he was happy with the direction the organization has gone since it started out as not much more than an idea 14 years ago.
“W have extended our ability to influence government decisions by working together with other regional alliances and groups,” said Hyland. “The organization has grown in the past 14 years and we have done interesting things. I think we should be proud of what we accomplished. It was all done by hard work and persistence.”
New board chair Jay Slemp thanked Hyland for all his hard work to get the organization established. He hoped to continue Hyland’s legacy and the help the organization continue to grow into the future.
“Alone, we can’t really do much,” said Slemp. “We don’t have enough profile. I have always believed in being under an umbrella (of different partners), and under that umbrella all the different organizations working.  With PEP we are making connections. We are connected with Ports to Plains, and we are connecting all the way through. That’s what we are hoping to do. I appreciate the opportunity to lead that.”