Farewell to Suffield base commander 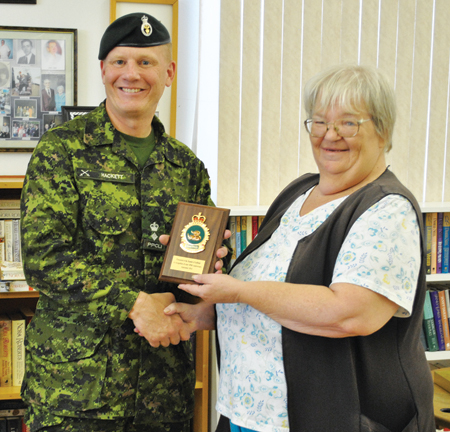 Lt. Col. Sean Hackett presents Pat Dennis of the Suffield Historical Society with a plaque celebrating the base's long relationship with the community.

By Tim Kalinowski
DRDC-CFB Suffield will see it’s latest bi-yearly change in command take place at a special ceremony on July 30.
Lt. Col. Sean Hackett is moving on to take a deputy chief of staff position at the Canadian Army Doctrine and Training Command in Kingston. His replacement Lt. Col. John Scott will be taking over base commander duties at Suffield by the end of the month.
Hackett was recently in the hamlet of Suffield to celebrate Canada Day and took some time to talk to the Courier. He said the last two years have gone by in a flash, but there are some highlights which definitely stick out in his mind.
“It really is just a whole mosaic of images and highlights,” said Hackett. “Whether that be the professional highlights in terms of doing that core business with BATUS, DRDC and all the elements we support; or being out in the community. The biggest highlight for me, quite frankly, is being out on the prairie. Any tour out on the prairie, for me, was a great day. The Freedom of the City parade in Medicine Hat was also another wonderful day. I also very much valued the “Medicine Hat’s War” exhibit, which had a long run at the Esplanade.”
Hackett credited his great team at DRDC-CFB Suffield for making it possible to do his job effectively.
“I am spoiled here at Suffield,” admitted Hackett. “I am just the base commander. I can’t doing anything without a quality team, whether that be the leaders who work for me in uniform or the public servants who support that base and BATUS. It takes a collective effort. It’s a busy place. You all have to pull together to make it work.”
Hackett said he is particularly proud of being able to help resolve a long-standing water service provision dispute for the community Suffield between Cypress County and the base, and move other relationships forward with local area partners and stakeholders.
“The base is large and it reaches a lot of people. There will always be sources of friction. And one hopes that we will always be able to retain the strong relationships which can overcome that. I have spent quite a bit of time and energy working with our friends and neighbours, and working with the oil and gas industry. Making sure the local grazing industry has carried on with some traditional support, and kind of moving small things forward and measuring how the accumulation of small things can take the base further in a short two years.”
Hackett said he will take many fond memories of his time in southeast Alberta away with him as he goes forward in his military career.
“When you are in command, the time always goes by far too quickly. I think the thing is you meet so many fascinating people along the way, and across a diversity of different efforts, which you would not have imagined when you came in two years prior. It’s been challenging, but it’s been great.”