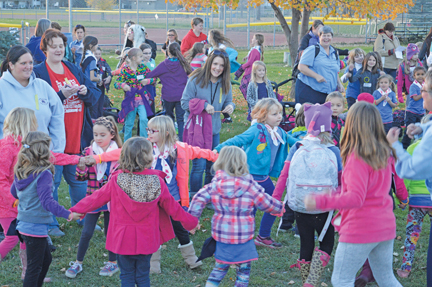 The Redcliff Pathfinders and Girl Guides organized a Nite hawk event for the Guides, Brownies, and Sprites from all over the region on Saurday.

By Tim Kalinowski
The Redcliff Pathfinders and Girl Guides hosted a wild, western-themed Nite Hawk event at the Baden Powell Centre on Saturday evening. About 253 girls and 40 adults involved in Guiding from Brooks, Bassano, Medicine Hat, Redcliff and areas in between took part in the event. Imagine hundred of screaming and laughing little girls competing as teams in activities like panning for gold, fishing for snakes, Pony Express giant beach ball riding and calf-roping to give you some sense of the sights, colours and sounds confronting all those who came out to view the spectacle. The girls were adorable and looked like they were having a lot of fun, which is the point said Redcliff Pathfinder/ Guides co-organizer Trina Caunter.
“One of the big things these girls look forward to is this event during the year. It’s the one time most of them get to see each other. They learn some skills, but they definitely have a lot of fun too. Fun is what it’s all about.”
Fellow organizer Sandra Smith said part of the girls’ delight with the Nite Hawk is none of them are told what to expect ahead of time.
“It is a night time event to let them experience them activities,” said Smith explaining part of the event’s educational component. “I can honestly say they are not looking forward to any one event because the girls did not know about any of them before they got here tonight. That is part of the excitement of it.”
Smith and Caunter were very encouraged by the numbers of girls who came to Redcliff on Saturday. They were gratified parents still look to Guiding to help their daughters grow into strong, confident and self-reliant young women.
“They learn a lot of life skills which, hopefully, as adults can hold onto them. It lets them be part of the community,” said Caunter.