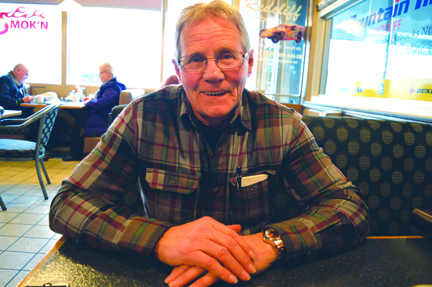 By Tim Kalinowski
For Mayor Ernie Reimer 2015 had a lot of positive highlights for Redcliff residents. The town completed the first stage of upgrades to the sanitary sewer system by upgrading the Broadway line to Main Street and Sangster Crescent, rehabbing the sewer line into the Broadway Lift Station and by doing an inflow study on the town’s overall sewer system to maximize efficiency.
“All of these things needed to be done. This infrastructure came very close to failing,” said Reimer in a New Years interview last week. “All these upgrades are going to help with our sewer problems. But we’re not there quite yet. We know these lines are still constricted and they need to be upgraded. Right now we have to curb our growth because we don’t have the capacity through our sewer flow to accommodate expansion, growth and an increase in population.”
Reimer said he has heard estimates of up to $20 million to finish upgrades to the sewer and water lines in the community in the years ahead. And that cost does not address the issue of sewage treatment capacity. Sewage treatment is currently contracted out to the City of Medicine Hat. If line upgrades were to go ahead in Redcliff, likely there would be a need to upgrade the City of Medicine Hat’s capacity to treat increased inflow or perhaps a new sewage treatment would have to be considered for construction in Redcliff itself. The cost estimate to do so would be about $15 million.
Reimer said council is nowhere near ready to consider forking out that much money with a stumbling economy and possible federal and provincial government funding still up in the air. But council is committed to pushing the sewer system upgrades along in 2016 as best it can within the town’s means, said Reimer.
“We are going to remain status quo (on the lines and plant upgrades) for the time being. For 2016 there is not a whole lot on our plate. We have constricted funds, but we are going to be purchasing a stand-by generator set for emergency operation on our sewer lift stations. We did have a small one before, but we have five or six lift stations in Redcliff. If you get a heavy rainfall and they can’t keep up or short out. So now we are going to have two back-ups. This new gen-set is going to be a significant size; so we are very pleased to be able to purchase this.”
The important thing to know, said Reimer, is council is taking action. And he thanks Redcliff citizens for their understanding; many of whom experienced the consequences of the degraded state of the town’s sewer and water systems after the 2013 overland flood.
“That (flood) certainly woke us up to the fact we had much bigger problems than we thought. That’s how this process all sort of got started. We had folks that were really angry with us who thought we weren’t doing enough because their basements were being flooded. So folks know what are challenges are and what needs to be done. I think because of that there is a lot less backlash from citizens when we explain to them why their sewer fees, for example, and taxes need to go up.”
On a more exciting note, Redcliff will also have its brand new water treatment facility come online in the near future and major arena upgrades are also on the horizon.
“The new water treatment plant is the biggest infrastructure project that I know about that has ever happened in Redcliff,” said a clearly proud Reimer. “And we have applied and received a grant from the federal government for our arena upgrades. We already have the funds, but we are not able to spend them until 2017. We are going to put a new heating system in there and a new speaker system. We are also looking to purchase some flooring for the ice surface so that when we hold events we can cover the whole ice surface with this flooring and remove it and store it when we are not using it. So we are looking at the space potentially for our Remembrance Day ceremonies in the future.”
The town also took delivery of a new Zamboni and a new sewer cleaning truck. There will also soon be a new garbage truck, which should be arriving in a few months time. However, Reimer said his biggest personal highlight of 2015 was successfully recruiting a new family physician to open up his practice in Redcliff after spending nearly five years without one in town.
“With the physician recruitment and retention committee, we started in late 2014. As a a result we were able to convince Dr. van der Merwe to set up his practice in town. So we were quite happy with the results there.”
However, Reimer feels Redcliff, like much of southeast Alberta, will likely face continued economic uncertainty in 2016. Council is aware of these concerns, said Reimer, and will be curtailing spending in the year ahead to keep the town in a strong position to weather the downturn. Reimer has faith in Redcliff residents to be able to work together as a community to do so.
“We are all tightening our belts, and we, (as a town), don’t have a whole lot of funds available to us to tackle any big projects. We are just going to travel along as smoothly as we can in this coming year and look forward to the year 2017. A lot of folks are out of work, and I know Redcliff is no exception. We are all in this thing together; so remain hopeful and just stick with the program and ride it out. I am sure are all going to come out on top in the end,” said Reimer.