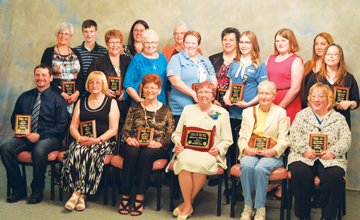 By Tim Kalinowski
Redcliff held its annual Volunteer Appreciation Night at the Legion Hall last Friday evening. The sold out event ensured the local volunteers nominated for recognition by the community’s various service clubs and organizations were toasted, wined and dined as befitting their wonderful efforts to make life better for all in Redcliff.
Once again, the night featured an Oscars theme and a red carpet. The volunteers were escorted up the carpet to the front of the stage to receive a special plaque and star by a representative of the organization which had nominated them. As they made their way up the carpet, Redcliff Lions Club representative Brian Lowery read out the letters he had received from the organizations which stated the reasons the person had been nominated. Fellow Lion Vic Lutz ran traffic control at the front of the stage.
Cindy Murray also acted as host for the evening, and Pat Hauck led the assembled guests in the singing of “O Canada” and through the pre-dinner prayer.
The final award on the night went to Redcliff’s Citizen of the Year Sharon Kirvan, who brought several members of her family to sit at the head table with her including her mother Margaret Blades, her sister Shirley alongside husband Allen Akers, her nephew Kurtis, and his family Darla, Slade and Tryp McFadzen.
“I would just like to thank the Lions for this honour,” said Kirvan after accepting the award. “I have lived in Redcliff all my life so this is quite an honour for me… I would like to congratulate all the other volunteers who were recognized tonight for their commitment and involvement in the community. Redcliff has always been, and still is, a great community to live in and bring your kids up in. And it is because of the investment all the volunteers put in, and the commitment that they have to make it that way.”
After the presentation ceremony all the recognized volunteers took part in a group photo. Luminaries on hand for the event were MLA Drew Barnes and his wife Frances, Mayor Ernie Reimer and his wife Sharon, Coun. Chere Brown, Coun. Jim Steinke and Coun. Larry Leipert.
MP Jim Hillyer and his wife Olivia had also been expected to attend before his untimely passing on March 23. Instead of bringing in another speaker to take his place, banquet organizers opted to hold a moment of silence in the slot which had been reserved for him. A very moving moment indeed, and a great addition to a stellar evening of good food, glitzy formal attire and warm community spirit. 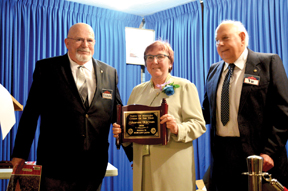 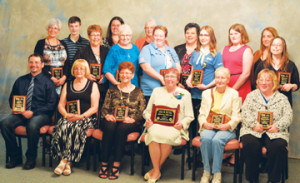