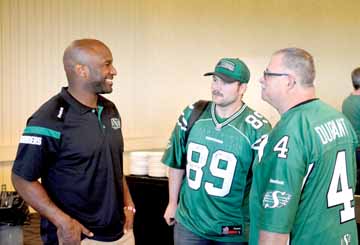 PHOTO By CHARLES LEFEBVRE- Darian Durant chats with Saskatchewan Roughriders fans Patrick Lafferty (centre) and Keith Levee (right) at the Clarion Hotel Friday evening. The quarterback for the Roughriders was in town for a fundraiser for the No. 15 Medicine Hat Royal Canadian Air Cadets.

By Charles Lefebvre
Southern Alberta Newspapers
Darian Durant had heard Medicine Hat was a great place from past teammates, and finally had the chance to experience the city for himself.
The quarterback for the Saskatchewan Roughriders made the trip into town for a fundraiser for the No. 15 Royal Canadian Air Cadets Friday evening at the Clarion Hotel.
“I’ve had a couple of teammates in the past come out here,” said Durant prior to the fundraiser. “Andy Fantuz, he’s a good friend of mine, and he had nothing but good things to say about this place. It’s always been somewhere where I wanted to go, but never had the opportunity, and as soon as I got the call with an opportunity to come here, I jumped right at it.”
Durant says it is important for him to give back to fans of the league.
“There are so many people out here who aren’t as blessed as I am,” he said. “I have a platform to be heard, not only around the country, but around the world. Whenever I can come out, lend a helping hand, help out for a great cause, help out the great Rider fans around Alberta and Saskatchewan, it’s a no-brainer for me.”
The fundraiser, which included a question and answer section with Durant, dinner and a silent and live auction, was to help the cadets send members to France to mark the 100th anniversary of the Battle of Vimy Ridge in April 2017. The cadets will also travel to Normandy during the trip.
“We think it’s quite pivotal,” said Cheryl Stock, fundraising coordinator with the cadets. “There are no First World War veterans – the last one died in 2010 – and there are only a handful of Second World War veterans … Our generation, even my generation, don’t know a lot about the Wars and don’t know about the sacrifices families made and men made, and it’s important we remember that.”
Roughriders training camp begins May 29, and Durant is ready to get back to playing football in front of Rider Nation.
“We had some bittersweet changes,” Durant said. “I lost some very important guys, some guys who were near and dear to my heart, and good friends, but that’s how the business goes from time to time. But, I love the new acquisitions we have. We have some guys who can really play, some proven guys in this league. As long as I can stay healthy, I can see us being in great shape.”