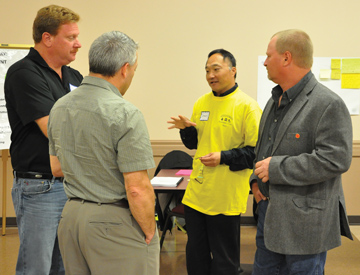 Southern Alberta Newspapers photo by Rose Sanchez- Cypress County Councillors were in attendance at the Medicine Hat public meeting to learn more about the modernized Municipal Government Act. They took some time to speak with government officials about some of their concerns with some of the changes. Pictured: Doug Henderson, Dan Hamilton, and Darcy Geigle, from Cypress County have a discussion with Joannes Wong, manager of planning advisory with Municipal Affairs.

By Rose Sanchez
Southern Alberta Newspapers
The summer tour of the modernized Municipal Government Act (MGA) wrapped up last week in Medicine Hat and Lethbridge, after visiting more than 20 areas of the province.
The Medicine Hat meeting July 14 drew municipally-elected officials, business representatives, school board trustees and representatives of social agencies.
Municipal Affairs Minister Danielle Larivee was in attendance and opened the formal part of the morning session by describing some of the major amendments made to the MGA.
“This is just essentially a first draft,” pointed out Larivee. “Based on the feedback (we have received) we will make amendments as needed before debate ends this fall.”
The Bill for the modernized act was introduced in the legislature at the end of May after almost four years of consultation. Debate is expected to continue into the fall with amendments brought forward, in terms of what was heard during the public sessions. Regulatory review and development will continue until January 2017, with final changes to the MGA, along with those regulations, set to be proclaimed later next year prior to the municipal elections in the fall of 2017.
Larivee highlighted some of the changes including the requirement of municipalities to form regional partnerships; the additional ability of municipalities to collect off-site levies for fire halls, police stations, community recreation facilities and libraries at a certain threshold of use; the option of reserving a portion of a new development for affordable housing; creating a more flexible property tax framework; and the requirement of municipalities to develop and adopt codes of conduct for council members.
More details about some of the major changes to the act were presented. Then there was time for the more than 100 people in attendance to ask questions before the open house portion.
Redcliff Mayor Ernie Reimer said he and his council have concerns about how changes to taxation and assessment in the MGA could affect their tax base.
“We have about 180 acres of greenhouses in town, so there is a huge concern in terms of the tax affect of that if the present situation did not continue,” he said.
Under the current MGA, greenhouses are taxed based on 50 per cent of their assessed value. Proposed MGA changes would mean urban farm buildings are exempt from assessment and property tax. It has since been clarified that greenhouses, and feedlots, are two examples of intensive agriculture, so would still be assessed and taxed.
“It is an extra strain on our storm sewer and the water that is supplied to them,” he said, adding if greenhouses could be taxed as commercial or even residential, it would be of more benefit to the municipality.
Cypress County councillors have concerns about the centralization of assessment as well as the linear tax and sharing that revenue source, said Reeve Darcy Geigle.
Linear tax revenues are collected from companies that have linear property items such as oil and gas wells, pipelines, or utility lines. Rural municipalities tend to receive the majority of these taxes.
Geigle pointed out often urban municipalities receive more grant funding as grants are based on population. He questioned where rural municipalities are supposed to get funding from for maintaining infrastructure such as roads if it isn’t through linear taxation.
Councillors also feel there is already fairly open discussion with their municipal neighbours about shared services.
Stuart Angle, chair of the Prairie Rose School Division, was in attendance. Angle asked why, when so many of the amendments to the MGA affect school boards, they were not recognized as a local authority and included in the discussions.
Larivee said it came to her attention earlier this year that school boards had not been specifically included in the conversation.
“Now the Minister of Education is leading an engagement process (with Alberta School Boards Association and some larger school boards) to ensure the perspective of school boards is captured,” she added.
The two areas being discussed are the planning and development of schools and how that fits into the modernized MGA as well as how municipalities and school boards should interact.
“We do have pretty good relationships with our municipal governments,” said Angle, but there is ramifications for school boards when talking about shared services as well as the land components.