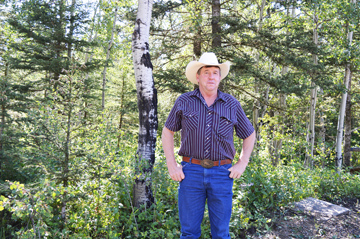 Photo by Tim Kalinowski- Dan Reesor, president of the Battle Creek Stock Association, wants the government to take actions to help mitigate the fire risk at Cypress Hills Park. The government's own internal reports point toward the extreme risk of fire.

By Tim Kalinowski
Although the moisture this year has ensured a low fire risk for the Cypress Hills, this does not change the fact the older forest is a tinder box ready to ignite with disastrous consequences, in the vein of a Slave Lake or Fort McMurray, with a an overall increased risk to human life. The Alberta government’s own 2009 report “Forest and Fire Management Strategy: Cypress Hills Provincial Park” does not pull any punches in that regard.
“A wildfire threat assessment was also undertaken for Cypress Hills Provincial Park,” the report reads in the preamble. “The mature and over-mature age of both deciduous and coniferous forest fuels is associated with significant surface fuel loading and continuous grass cover, which in turn increases the fire behaviour potential. Under the right fire weather conditions, the increased fuel load will create larger and more intense blazes that put the public and neighbouring stakeholders at risk. Extreme fire conditions may burn the entire park within 11 hours. Further, it is expected that the burning severity will be beyond observed historical levels in terms of consumption of soil organic matter, per cent canopy removal, and extent of burned area.”
The report goes onto to make several suggestions on how to mitigate some of the risks through more grazing, forestry management and some controlled burning; most of which have never been implemented to any major degree.
Dan Reesor, president of the Battle Creek Stock Association and a neighbouring landowner to the park, has been trying to get the government to take action on this fire threat for over 20 years.
“Cypress Hills is a pretty small green speck in Alberta forests,” explains Reesor. “Every place certainly needs to be looked at, but they have got to start somewhere. And why not start some place like here and learn as you go? Maybe a few things turn out to be not absolutely the perfect solution, but to do nothing is inevitably going to result in a huge catastrophe. And you can find very few people in the know, who don’t know Cypress Hills is a disaster waiting to happen.”
Reesor says successive Alberta Parks Ministers have made the journey down to the Cypress Hills, acknowledged the situation, but have done little to change the circumstances on the ground. Reesor sometimes feels like the lone voice in the wilderness on this issue as he continues to beat the drum for action, but his members have encouraged him to keep up the fight. He is hopeful with Fort McMurray freshly in mind and a new government in Edmonton something might actually move this time.
“At some point somebody has to step in and say we need to do some (fire) management because nobody wins if this thing goes… What worries me is by overlooking the monster in the room, there is going to be a disaster at some point. It’s an older, mature forest with rank grass and a continuous blanket of fuel from border to border. It could be a cigarette, hot brakes, lightning strike, campfire, there are multiple potential sources to get this burning. We have over 250,000 people a year passing through the Cypress Hills. It’s just a matter of time until our luck runs out.”
In the mean time locals are doing what they can to raise awareness and take what few actions they are able to within their own power to help the situation.
“Everybody does what they can,” confirms Reesor. “They keep their yards groomed, grazed, with usually a buffer zone. All our members, most of the cottagers, the local Hutterite colonies, the surrounding farms and ranches get it. The government even gets it, but they keep managing to shuffle it to the side.”
Reesor says he wants the government to take its own report seriously and get started on a few tangible things as soon as possible. Every year something does not happen adds another year of fuel load within the park and makes a catastrophic result inevitable.
“In the short term, we would like them to work more with the local stock associations to do something about the grass situation. There is mulching the park boundaries to create small fire breaks so a fire can’t come in off a neighbouring ranch or escape out of the park boundaries. It gives us a better chance to stop it. And then they could also do some strategic logging to thin out some of the biggest danger areas.”
Reesor acknowledges there may be some disturbance to the park’s lucrative tourist industry, and some public outcry as a result of some of these actions, (strategic logging in the park, for example), but he feels these disturbances are manageable if they coincide with a good public awareness campaign to explain why these things are necessary to the long term ecological health and public safety of the park.
“Alberta is probably one of the jurisdictions in North America that spends a tremendous amount of money on Fire Smart programs,” says Reesor. “They have put a lot of effort into it, and following both Slave Lake and Fort McMurray they are starting to rethink, and think it’s maybe not enough to do a little bit of thinning here and there. There is going to have to be some pretty strategic interventions to protect all the values at risk. Why not have small, controlled disturbances rather than waiting for a giant disturbance such as a Fort McMurray situation?”