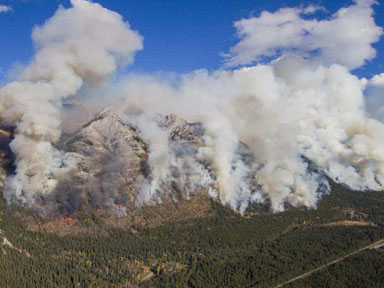 The Sawback area in Banff National Park undergoes prescribed burns in 2014. Peter Swain, South Region Director for Alberta Parks, says his ministry has plans to do the same in the Cypress Hills now that Fire Smart work around the Elkwater townsite is complete. PARKS CANADA PHOTO

Peter Swain, South Region Director for Alberta Parks, acknowledges more needs to be done to offset fire risks in Cypress Hills Interprovincial Park from a broader ecological perspective, and the park intends to do this through use of intensive grazing and prescribed burning.

“This year we will create a prescribed burn plan,” confirms Swain, “and then it will take one to five years depending on what the burning windows look like. I can’t guarantee you we are going to burn stuff next spring. I can’t because it might be really hot and dry next spring, and it’s a terrible time to burn…. I will say in the next one to five years you are going to see prescribed burns in the Cypress Hills… Since 2009 we have done a ton of stuff leading us to this point where we are now.”

Swain says park staff has not held concrete discussions with local grazing associations as yet to enlist their aid in helping mitigate the Park’s fire risks through grazing, but says it is a priority now that extensive Fire Smarting has been completed around Elkwater townsite and most of the park’s campgrounds.

“They have seen the (Forest and Fire Management, Cypress Hills Interprovincial Park 2009) report, but we have never officially asked: Can you start grazing this way? It sounds like they are at point where they are interested in doing this. And that is great because we are going to need their help to do it. They are going to be the ones doing it… What is clearly laid out in the Integrated Forest Fire Management Strategy (IFFMS) is working with the ranchers so they can ranch their cattle with a little more focus so we create corridors of high grazing and therefore low fire risk, alongside roadsides for example, where you might have a higher chance of getting a burn started.”

The report also suggested strategic logging of stands vulnerable to fire within the park, but admits the logging would likely not be commercially viable without direct government subsidization. Swain says he doesn’t see an extensive logging strategy as feasible option at this time as no lumber companies have expressed any interest in either doing the work or buying the wood if the work is completed by park staff.

“We would do that (logging) if it made sense,” says Swain. “Fifty years ago it would have made sense. We know that logging companies are not interested in our wood. We know there really isn’t a market out there for it; although it does cost us a lot of money to pick up the trees and move them. Certainly if somebody were interested in doing that, and they think they could actually make money at it, I would be interested to see that… When we cut our trees down and created our fire breaks, the wood was a surprisingly good quality and good size, but the best offer we got from a sawmill was we’ll come out and pick it up for free.”

Swain says Cypress Hills Park is right on schedule in fulfilling most of the recommendations laid out in the (IFFMS). Things just had to be done in a certain sequence, says Swain.

“We’re right on track for implementing everything that is in there,” he confirms. “We are actually quite proud of what we have done in terms of public confidence there. We have spent a little over two million dollars on Fire Smarting and fire breaks. There is a half million dollars alone we have spent on community wildfire sprinklers in Elkwater. We are at the point now where we have all of our infrastructure in terms of Fire Smarting in place.

“In the event of a cataclysmic fire, it is really about saving lives and infrastructure. We still have a few smaller campsites further out that haven’t been Fire Smarted, otherwise we have reached all the goals laid out in the (Forest and Fire Management report) except for the prescribed burning. We had to finish up all the right fire breaks before we could do that. We are now at the point where we can start considering prescribed burns. We’re at that stage now, and that is exactly on target for what the Integrated Forest Fire Management Strategy said.”

Swain feels there is an unprecedented opportunity for Cypress Hills Park over the next five years to address some of the broader ecological problems posed by the aging forest in the park. He is excited many in the area have expressed a serious interest in seeing that work done.

“Forest fire risk is about protecting people first, then infrastructure and the environment. So we have put our priorities where they should be to date,” says Swain. “I guess right now, given the level of discourse for wildfire and awareness of wildfire in the broader community, in the past prescribed burning has always had a lot of perception issues because people did not want to see burned trees or the smoke, but I think now with the heightened level of awareness in the community at large, people are going to be much more understanding of seeing prescribed burning and accepting of it. And that’s going to be half of the battle.”

“I am really excited that here in the next five years, we’re going to have an opportunity to make real difference in the health of the Cypress Hills both from an ecological perspective and a safety perspective.”

In response to some of the criticisms laid at the Park’s feet by members of the local grazing associations, Swain says the Cypress Hills ranching community has an important role to play in all of this, perhaps even more crucial than prescribed burning, in the near future.

“The ranching community has a real role to play in creating fire breaks and areas of decreased fire risk along critical corridors, and that is what we are going to be asking them to do through annual grazing permit that comes out,” explains Swain. “That will be part of their grazing permit starting next year. We will be asking them to help reduce these areas of fire risk as part of their overall grazing strategy.”