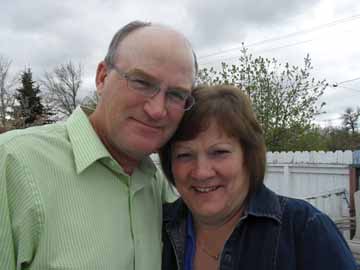 Photo submitted by Nick Dykstra- Andy and Bev Dykstra truly love their family farm, A and B Acres.

By Jamie Rieger
The dynamics of a family farm have not changed much over the past 100-plus years. It is still all about working together to get from seed to harvest. Multiple generations of
family members knowing what needs to be done, then rolling up their sleeves, and digging in to get ‘er done.
Andy and Bev Dykstra operate their family farm south of Burdett and truly epitomize what a family farm is all about. It is for that reason that they are this year’s recipient of the 2016 County of Forty Mile #8 Farm Family of the Year award.
The Dykstra’s purchased their farm, from Bev’s dad, Bruce Major, when he retired from farming in 1979. Major continued to help out at the farm as the Dykstra’s embarked on continuing the family operation, A and B Acres.
“It is a husband and wife team effort for around 30 years. The son has been helping out whenever possible. Andrew is the day-to-day worker of the farm. Bev is the bookkeeper and works at the hospital and a very good cook when not working,” reads the nomination form.
Their son Nick, who nominated his parents for the award, also works on the farm.
They stick to conventional farming practices, but minimize tillage to conserve moisture levels (which they monitor every day) and are careful about following the directions of their products. Andy also carefully manages the farms finances and watches the market prices with a close eye.
A and B Acres uses larger equipment these days to get the job done more efficiently than family farms of yesteryear.
“We have pretty conventional practices, but these days there are better chemicals, better equipment, and newer, modernized irrigation equipment,” said Andy. “There are better breeds of grain out there now, too. The basics are the basics, but we try to modernize as best we can.”
At A and B Acres, they grow sugar beets, red hard spring wheat, and a little alfalfa, but do not have canola in their rotation.
“You can’t grow canola if you have beans. The canola can get flea beetles, which affects the beans and beets, and if you have canola, it would have to be four years between the beets and beans, so we just don’t grow it here,” said Andy.
They fertilize with an air drill right into the ground and only complete one pass. They also straight-cut rather than swath which also means one less pass over the field and generally, will result in a better grade. The use of GPS-controlled pivots means a lot less loss of water.
Preserving A and B Acres, which supports three families is vital to Andy and Bev.
“We are very cost conscious and have no hired help,” said Andy, who said the family farmer has to treat his operation like any small business.
“It’s like the local grocery store. There has to be concerns that big business will come in and take over. As a family farmer, it is difficult, but we don’t want to see things go to the highest bidder,” he said.
When it comes time to harvest, other family members arrive and pitch in to help.
“The harvest is a big deal and we have family who take time off from their jobs in the city to help out and Andy’s parents bring the meals,” said Bev.
Surrounded by other similar small family farms,  when they or one of their neighbors needs a helping hand, they chip in and help out.
“We help our neighbors and they help us,”
Andy recalls one year when they were going to see a hard freeze and everybody lent a hand to get the sugar beets out of the ground in time.
“That’s what it’s all about. It’s not a money thing,” said Andy.
Being involved with the community is also very important. Andy was involved with the local beet board for 30 years and an elder for the Bow Island E-Free Church, but retired from both to help with Bev’s dad’s trips to Calgary. Major passed away last October.
Sticking to conventional principles and employing stringent stewardship practices means Andy and Bev’s children and grandchildren will be able to continue with the family farming tradition.
“We live by the Golden Rule and care for the land so it can carry on to our kids and grandkids,” aid Andy.