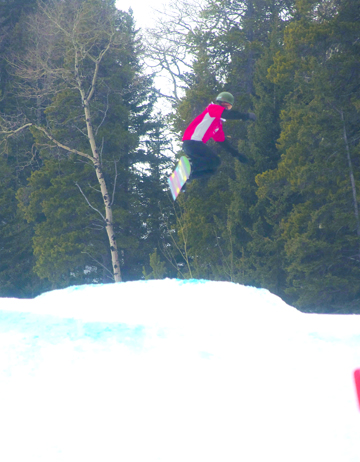 The annual Slush Cup and Big Air competition at Hidden Valley Ski Resort brought 64 participants to test their ski skills on the small open pond and in the terrain park Saturday.
Many of the skiers and snowboarders took an instant nose dive off the jump, plunging into the icy water, while others carved their way through to the end, hopping out quickly to stay warm.
“We have the Slush Cup, which is pretty much try and get across the pond,” said Mike Ractliffe, head of visitor services .
“It’s a traditional event that has been held here for many, many years and most ski resorts will have something similar to it. We do them all on the same day and try and finish off our season with a bit of fun and wet people.”
The age range was anywhere from 10 right up until adult and “it’s one of those where people get dressed up, there’s a bit of a festive atmosphere,” said Ractliffe.
“We’ve got music playing, prizes for everyone and it’s just a case of people getting down here and having fun.”People have dressed up as ballerinas, in their onesies and retro ski gear in the past and there was a monkey hanging around during the day.
Dunmore snowboarder, Mason Appell, competed in his first Big Air competition.
“I like big jumps, just more air time, and it gets you all pumped up and hitting a good rail after,” said Appell.
“I like (that) there’s a lot of (energy.) Everyone is cheering for everyone, no negativity from anyone. It’s all great. I usually hit (the) park everytime I’m out here.”
He said the conditions were icy out there in the morning, but when everyone rode over the snow, the powder was looser.
“Bombing as fast I could and try to jump the whole thing,” said Hat resident Russell Brooks-Jackson of hitting the pond.
“At the end I did a couple swerves because I was like ‘uh on I’m going to hit that water hard.’”