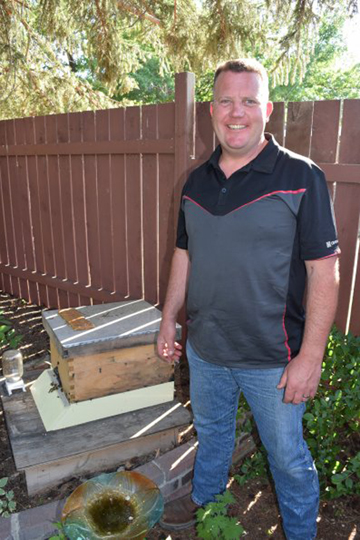 Southern Alberta Newspapers photo by Peggy Revell Toby Newton smiles next to the beehive in his Redcliff backyard. Not only does Newton's hobby of urban beekeeping produce plenty of honey for friends and family, it's also helping support the bee population which is needed for so many of the foods people love and enjoy.

With bee populations dwindling worldwide, Toby Newton has taken on the task of beekeeping right in Redcliff.
He came to the realization that he could be part of the solution at his agronomy job at South Country Co-op’s Agro Centre in Medicine Hat.
“It didn’t force my hand to want to do it,” he said. “It just persuaded me more to do it.”
Since the Co-op was bringing in beehives, Newton was able to get a package of bees, which is how he got started beekeeping.
He says the decline in bee populations is a result of chemicals farmers are spraying.
“When people spray a field for pesticides, or insecticides even, they can’t stop the bees from being in there, so it catches everything,” said Newton.
“It catches the good bugs and the bad bugs, so all the beneficials, like ladybugs, bees (and) parasitic wasps, they all get caught up in the mix as well.”
The decline in bee population will have significant negative effects on our food sources.
“We could lose honey, we could lose bananas, we could lose all kinds of fruits that come form the tropics or Southern America,” he said.
“Without bees, we’d lose a massive, massive amount of produce.”
Newton deals specifically with bees from New Zealand.
“Their summer is obviously opposite to ours,” he said. “When the bees are declining towards the end of (their) summer, bees will keep a certain amount of bees within the hive to look after the Queen over the winter.
“But if there are too many bees in there, they’ll die, so what they’ll do is take a certain amount of those bees out of those hives and put them into packages, and ship them to North America.”
Bees can produce honey all year, provided they’re in the right climate, added Newton.
During the winter, he wraps the hive up with silver-lined bubblewrap, leaving a small hole on the bottom in case the bees want to go out.
“When you hear a hive humming in the winter, it’s means that they’re just flapping their wings to regulate some heat,” Newton said.
“When you get nice sunny days in the winter, even though it’s cold outside, you’ll often see bees come out for a cleansing flight, which means that they’ll come out, just have a clean, stretch their wings … find water if they have to and then come back to the hive again before it gets too cold.”
He says his garden has benefited immensely from having bees around.
“I’ve seen more fruit on my apricot tree and it’s been consistent (for) years from having bees in my garden, just because it gets pollinating more,” Newton said, adding that he’s noticed similar impacts for his cherry tree and flowers.
“The flowers look absolutely amazing in the garden.”
His neighbours have noticed similar benefits, he said.
“It’s not just my garden, it’s everybody else’s garden in Redcliff,” said Newton.
Bees have a five-mile radius and there’s another beekeeper on the other side of Redcliff, so the advantages are town-wide.
Newton said some neighbours have inquired about the risks of getting stung, but unlike wasps, bees will only sting when they feel threatened.
“I’ve showed them the hive, and I’ve showed them how close I can get to them and how close my dogs get to them,” he said.
“Once they see that, they say, ‘Oh, okay. That’s awesome.’”