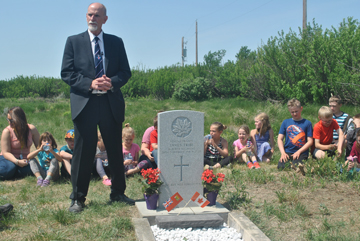 Commentator/Courier photo by Jeremy Appel Jenner School principal Murray Brown speaks at the gravesite of James Tribe, a First World War veteran whose grave was repaired by students at Jenner and Schuler Schools.

In time for the 74th anniversary of D-Day on June 6, students from Jenner and Schuler Schools unveiled the repaired grave of a First World War veteran buried at the Jenner Cemetery.
Family members of James Tribe, who died at the age of 29 from the flu, were in attendance, as well as local dignitaries, such as Prairie Rose School Division trustee Arnold Frank, Cypress County Coun. Alf Belyea and the hamlet’s fire department.
“This is not to be a sad and somber event at all,” said Jenner School principal Murray Brown.
“There’s a bit of ceremony involved, but I want it to be upbeat. It’s a celebration of many things, especially the memory of James.”
The project to repair the tombstone started in November 2016, he said.
“We realized that there was a military grave here and that it was in very poor condition,” said Brown.
He said Jenner’s junior high class, which includes Grades 7, 8 and 9, took the initiative to fix the gravesite, although the rest of the student body was also involved, including Grade 6 students from Schuler.
They contacted the Commonwealth Office in the U.K. to get as much information as they could on Tribe, discovering his wife, who died two years prior from childbirth, is also supposedly buried at the Jenner Cemetery.
They then contacted Tribe’s relatives through calling the various entries for that surname on Canada 411.
Rose Dennison of Hope, B.C., Tribe’s great niece, spoke at the ceremony.
Her father was Tribe’s older brother.
“They all lived around here. They came out from Ontario and settled around Jenner,” she said.
“We heard stories about Jenner all of our growing up years, because it was a pretty rough life, but I think people bonded and they really relished the memories that they made here.”