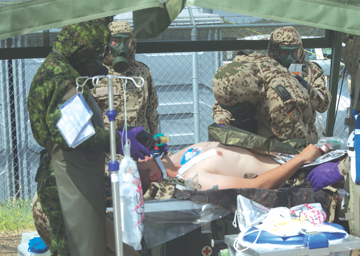 CFB Suffield has been hosting nearly 400 soldiers from 10 NATO countries over the last few weeks for Exercise Precise Response, a Canadian forces-led simulation of a chemical, biological, radiological and nuclear (CBRN) attack.
This exercise has been carried out by the Canadian government for 15 years.
Media got a glimpse of the exercise on July 25 of the simulation the soldiers use through a scenario where a fellow comrade needs to be decontaminated and goes through medical procedures to be stabilized.
“We’re using as much as realistic as props as seen lined in the streets … to simulate as much as we can to the real thing that happened”, said Maj. Christian Lepage, executive director of the exercise.
“Sadly we’ve seen stuff that happened in Syria and other countries. The Canadian forces offer a training ground for all major NATO partners to be able to react to that kind of event.”
CFB Suffield has been a suitable location over the last 15 years because of the availability of the research centre where studies have been conducted on CBRN defense compatibility.“When we look around, there’s not that much human beings,” said Lepage.
“In the middle of a field for security reasons we need exact space to be able to do business. When we look around, if there is something we have enough buffers on, (and)to be able to react to a potential threat. This centre is the only place in Canada that has been mandated by the government of Canada to be able to host live agent training and to do that type of research.”
The soldiers used agents that are any type of pre cursor to create a real threat, he added.
German Col. Hans Holthern, a doctor with his country’s troops that made up the medical procedure and defence contingent along with the Canadians during the exercise said, this was a part of the concept that was developed by the German soldiers last year.
“Together with our Canadian partners, as you could see the presentation we performed (was) decontamination and treatment of the patient,” said Hothern.
“It’s a German invention, if you might say so.”
Compared to a normal medical call out in the battlefield, a CBRN scenario is much more complex because you just don’t take care of the wounds of the patient, but you have to take care of the decontamination.
“If you take a wounded patient who is contaminated into a medical treatment facility, you immediately destroy the whole ability of the treatment facility because you can no longer use it,” said Holthern.
He described having the Germans in rural Canada as “if you fight together, train together and you party together,” and for the young soldiers to get into an international environment, “they talk to the Canadians, talk to the Italians, to the Spaniards, to the Belgians, all nations here, they really appreciate this international atmosphere.
“Even those for whom it’s hard to talk because language barriers are sometimes a problem—(during) party time, there’s a different language.”