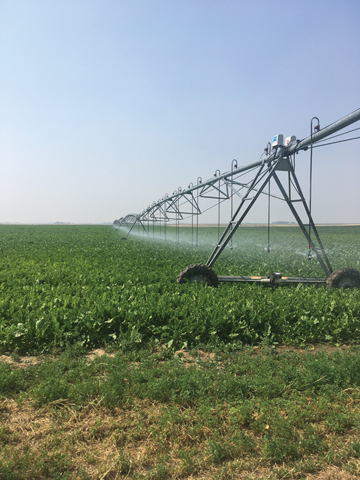 If it seems like record-breaking heat waves would affect the year’s crop yields, the truth is if you’re a dry-land farmer in Forty Mile County, August weather is basically moot.
“The state of their crops was probably decided three, four weeks ago,” says county Reeve Steve Wikkerink. “Any moisture now is too late; now everybody wants it to stay dry so the quality is still fairly good. The guys want to get it off and in good shape.
“The guys that are combining on dry land, it’s really small yields, and some of these guys probably haven’t seen this (weather) since the ’80s. But everyone kind of knew that one of these years the temperature was going to change.”
Wikkerink himself is an irrigation farmer, with land split into dry beans/sugar beets and spring wheat/durum. He says irrigation farmers in the region received schooling in drought conditions at the turn of the century, when it got bad enough the irrigation district significantly restricted water use.
As another drought period seems to have arrived, he and others in the field have much more experience in water conservation. But dry-land farmers have nothing to conserve.
“Growing up on the irrigation side, I would really struggle trying to switch over and go dry-land farming,” Wikkerink says. “If your crop is out there suffering and you can’t do anything about it, that would really be hard for me.”
Wikkerink says ahead of 2017, dry-land had 10 -12 “incredible” years — speaking last summer to a 20-year-old who’d never seen a summer of such drought.
And if it continues, the days of 100-per-cent seeding will likely be over.
“Years ago, it was 50-50 farming,” Wikkerink says. “And then they went to two-thirds crop, one-third chem-fallow. The last 10 years or so, it’s pretty much been wall-to-wall stubbled in because we’ve had so much moisture.”
He says he’s heard some farmers discussing a reversion to two-third, one-third again. Regardless of having been there before, taking a hit to revenue they’re now used to can cause real issues.
“All of us farmers have to keep updated machinery, and at times you’re trying to expand your land base,” Wikkerink says. “You kind of bank your payments on the amount of acres you’re going to be farming. If all of a sudden, you’re going to drop 25 or 30 per cent of that … it’s going to be tough.”
And chem-fallow doesn’t just hurt revenue, as weed prevention of that land is both imperative and costly.
“A lot of it is going to depend on what happens between now and freeze-up, and what happens in the winter,” Wikkerink says. “Or, I think the dry-land guys are going to have some real hard decisions to make next spring.”
One saving grace can be crop insurance, which is currently based on high-yield averages and can ease short-term damage. But, of course, that only continues through the first few years of a drought cycle before yield averages fall and insurance support goes with it.
Simply put, rainier years need to hurry back — such as 2016, which ended with high levels of precipitation.
“All that moisture stayed in the ground until last summer,” Wikkerink says. “So everybody had five, six feet of moisture in the ground, and that’s what the plants lived on.”
Drought conditions took hold in 2017 however, and by the time spring rolled around again, the ground moisture base had dropped by half. Once that depleted moisture was used up, crops were out of water.
“That’s why this year is looking worse, even though we have had a few dips in the temperature.”