Harvest day for Foodgrains Bank results in more than 3,000 bushels 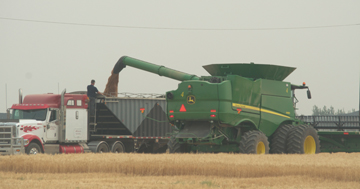 The Canadian Foodgrains Banks held the annual Harvest Day on its S. Boundary Road fields on Wednesday.
The initiative began in 2000, where grain is grown on donated land, then harvested and sold, with proceeds shipped to Third-World countries. Sales are also matched four to one by the federal government.
“This year we have 100 acres seeded,” said Charlie Redpath, co-ordinator for the Medicine Hat project. “I’m hoping (total) 30 bushels to the acre, but from what I’ve seen here, it’s more than that.”
Redpath wanted those in attendance for the harvest to realize what the Canadian Foodgrains Bank is trying to accomplish, and to emphasize how it’s made up of 15 church organizations.
“We like to feel we’re on top of where it’s needed and we can get the stuff to the people when it’s needed,” he said.
As for the conditions, he felt it was “abnormal,” because of the wetter harvest over the past two years and the drier summers.
“It’s nice and dry today and the crop is coming off good,” said Redpath.
“I would say we have a fairly decent looking crop by the look of it. I’m happy with that.”
The bushels taken off were expected to be in the 3,000 to 3,500 range, down from the 4,600 a year ago. Redpath attributes the decrease to a lack of rain.
MP Glen Motz was on hand for the event, taking him back to his decades on his parents’ farm, where a harvest not only fed the family but people in Canada.
As he got older, Motz was able to explain how grain was shipped worldwide.
“It’s a miracle,” said Motz. “You put seed in the ground and it multiplies.
“The beauty of the multiplication factor is the Canadian Foodgrains Bank. People from across the country gather the harvest and the federal government quadruples it. That makes a difference for people who don’t enjoy what we enjoy in the bounty of this land.
“It’s always a thrill to be here and connect with old friends again and take a ride in the combine. I know I miss them, they’re great.”