Schuler Community Association looking at all avenues for aging hall 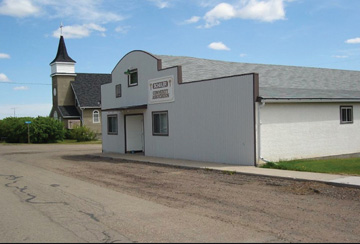 The process had taken about a year but in that time the Schuler Community Hall has been considered no longer viable for events and in the stages of being classified as a possible condemned building.
There were a number Schuler citizens that became concerned with the structural integrity of the building, which was evident from the exterior of the hall.
It was requested that an engineers report be done on the building to see where repairs had to be done and it was after the report had been complete that the Schuler Community Association had met to discuss the hall’s flaws.
The hall was built in 1946 and the concern in the report was the integrity of the roof to the point of sagging.
“The hall is not yet officially condemned,” said Michaela Holt, secretary for the hamlet’s community association.
“Which is good to note because it’s not totally beyond repair yet. The problem is that there is expensive repairs required according to our report.
“We then had to deal with reality of insurance and liability moving forward.”
The community association met in July and that is when the board voted to close the hall due to the slowly collapsing roof, knowing there are other facilities available for functions, she added.
Schuler’s facilities include the new school, the skating rink and the curling rink to host events in.
“We knew for the most part our functions could still on go and as an association, we could still exist,” said Holt.
“We would just have to modify so we can run out of those buildings until something was decided of a long term venue of our association. That all now sits in the hands of the committee that is designated to investigating.”
A venue options committee has been hired to look at all our options in the community and coming back with repair costs before a final decision is made.
“It’s going to be a very close race between repair costs and (what) the other options might have to be,” she said.
Although the potential condemning process is ongoing, community halls still mean a lot for small communities.
“It’s one of, if not the oldest, running operating community building in Schuler,” said Holt.
“In the aspect of still serving the community, it’s not as much a complete wash just because we still have other venue options. There’s lots of other communities where once the community hall closes, you have nowhere to go for things.”
With the hall not being owned by Cypress County, the municipality is not as involved in the facility other then applying for a MAP (Municipal Asset Program) grant, to help the community association with a study to build on to a building such as the curling rink.
The county is still waiting for an answer from the federal government
A spring meeting between the committee and the community association is expected to take place to discuss their options and organizing a presentation to bring forth to the county.