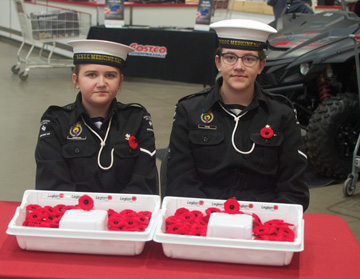 With November comes poppy season.
Royal Canadian Legions across the country are now giving Canadians a chance to support the country’s veterans in more way than one with their annual Poppy Campaign.
“We’ve been doing this in Redcliff for a really long time — decades,” said Redcliff Legion president Barry Cole. “Fundamentally this is a way to remember the sacrifices made by our veterans.
“All of the money goes towards helping veterans — going towards things like post-traumatic stress disorder, home care aid and anything else.”
The poppy became popularized in Canada after the World Wars, after Canadian solider John McCrae’s poem, In Flanders Fields, was published in Punch Magezine. The Legion’s predecessor, the Great War Veteran’s Association of Canada, adopted the poppy as its Flower of Remembrance in 1921.
The Redcliff Legion raises between $10-15,000 each year during the campaign, but Cole says goal is to get people to show support and that the money is not the main focus.
“We do good things with the money but it’s more about getting people showing the support for the veterans,” said Cole. “The poppies are easy to get and it’s an easy way to show support.”
Businesses across Redcliff will have boxes set up holding poppies, which are given out freely — with donations being optional.
“Most businesses here have a poppy box and people can always come to the Legion,” said Cole. “We get more and more businesses participating in the campaign every year.
“If you can’t give anything or can only give 10 cents, that’s OK.”
Cole says it’s important that we never forget sacrifices made by the veterans.
“It’s so people will always remember,” he said.
The Redcliff Legion also organizes the annual Remembrance Day ceremony that starts at Parkside School, and will have people march from the school to the cenotaph at 10:45 a.m. The laying of the wreaths will commence after the march.