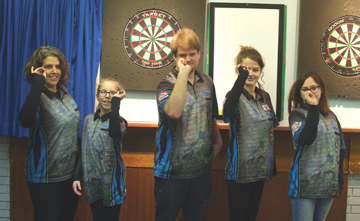 The Redcliff Youth Dart Club began play last fall and has attracted many players from the area to not only play a fun sport but to take their minds off their struggles.
Most of the players had been involved with Medicine Hat’s Southeast Alberta Youth Darts before coming to Redcliff.
Now this year, coach and president of the new dart club, Nikki Huber, wanted to start something up in the town that ran a little differently and have new kids join.
“Between the two leagues we didn’t have enough boards to just stay at one venue,” said Huber.
“The other league has 13 or 14 kids and we have 16. Between those two leagues we needed 15 boards to accommodate all the kids.”
The youth dart club’s composition is a mix of Medicine Hat and Redcliff kids, ages nine to 18.
“We have some that have never played before. We have some that have been invited to the world masters.”
The goal for the kids is to learn the doubles and the numbers on the board, which contributes to familiarizing themselves more to the game.
“Easy game to learn but a tough game to master,” she said.
“It’s accuracy. It’s mental, physical and a real emotional game.”
Some of the players deal with depression, anxiety and autism and darts has become therapy to take their minds off of reality.
“It’s their escape. It’s where they get to feel included,” said Nikki.
“We think that every kid should be included in sports. One of our biggest things with our league is to have those types of kids because they’re just as important as everybody else.”
It is often that kids who play darts are not involved with other groups and don’t fit in elsewhere, she added.
“Darts is like a home base for all of them,” said Huber.
“There is some where we bend the rules a little bit. We’ll let them listen to music if they’re having trouble focusing or they stand in front of the line because they don’t quite have the power to get it all the way to the board.”
Huber’s daughter Taylor is a junior member of the club that has been ranked second for her level by Darts Alberta for a two years in a row.
The 14-year-old has resorted to the sport to help her with dealing with depression.
“Personally, I’ve struggled with depression and anxiety since I was 12,” said Taylor.
“Darts was one of my escapes from reality. I just went down stairs and practiced for hours a day and made the provincial team for the next upcoming season. It’s just thinking about the math instead of thinking about other things going on.”
Her strategy is “trying not to show your emotions. It’s hard but you have to hide them or else someone can tell and you’ll lose the game.”
Taylor will look to avenge the point lost at last year’s provincials, which left her off Team Alberta and a third place finish, with a strong performance in Edmonton later this month.
“Meeting new people and new friends,” said Stuber, a senior category player on joining darts.
“It’s been pretty good. More people show up everyday.”
It will be his third trip to provincials and what is important to him is to stay focused.
“You have to stay on your own board. Stay focused to what your shooting and improve each time.”
His goal is to make Team Alberta too.
The sessions have been going every Saturday since September and goes until May at the Redcliff Legion from 1 p.m.- 3 p.m.