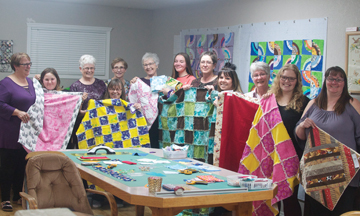 Commentator/Courier Photo by Justin Seward The Clearwater Crafters have created many different designs to make quilts.

The Clearwater Crafters have kept the crocheting needles and sewing machines going for a 11 years.
Originally held at the Clearwater Hall in 2008, the sewing club moved into its new digs over to Marlene Ziegler’s home north of Irvine in 2012.
Now seven years on, sewers come to the bonus room that was created above the garage to make room for a spacious sewing workshop.
Ziegler and co-organizer Judy Winquist started attending full-time right from the beginning in 2008 and found that Sewing commences every Tuesday nights and the occasional Thursday, Saturday and Sunday afternoons while
additional Monday or Wednesdays are tacked on if there is a special project.
“We pay $2 every time we gather here and that money is used to buy fabric and supplies for the sewing room and the quilts that we donate,” said Winquist.
“We rely on people donating money or fabric for us.”
When the club first began, the first major project was making 400 heart pillows for the Foothills Hospital’s cardiac unit and continued on from making rag quilts to wall hangings, coasters and pencil cases.
“There’s always a need for quilts to give them (seniors) some comfort,” said Winquist.
“We want them to have this and enjoy it.”
No fabric is wasted and the colours have to match.
“It’s all from bigger projects and we have all these left over pieces that we can’t throw a way,” said Winquist.
“If we don’t have the right colour, we have to go buy specific colours because nothing we have here really blends.”
The kids that come in have made a difference over the years with coming up with their own projects.
“We spent the first couple of years teaching young kids,” said Winquist.
“The first couple of summers we had a summer camp for kids and we had six kids. It was a totally teaching program for us to get them going.
“Now they come here and design their own stuff and do their own thing. The kids I think have done fabulous. We enter a lot of stuff in the 20 Mile Post Days in Irvine at the fair.”
Having the experience of senior sewers mixed in with younger kids teaches them confidence and in what they’re doing, she added.
Jenine Larsen has sewn with the club for eight years and considers the group like family.
“I think they’re my friends but they’re also like a big family to us,” she said.
“It doesn’t matter if you’re having a problem. You come out, talk it out. You bring food and we sew. It’s great.”
One of the newest members, 14-year-old Izahbella Franz, started in the program last summer because she wanted to hand stitch a stuff animal and her mom wanted to get back into quilting.“I like that you can use your imagination with making what you want to make,” said Franz.
The sewing club has made 73 quilts this year with 58 of them going to different charities and 15 going to special friends.
Seven sweater sets for infants and 52 baby toques were made by the crochet sewers.