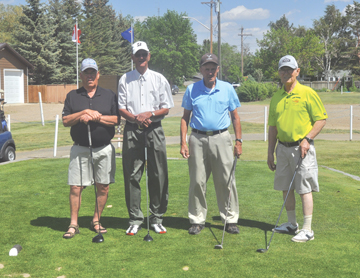 Larry Wolfe, Wally Granberg,Charlie Luca and Reinhold Karl have been golfing for over 10 years at the Foremost Golf Club together.

With a combined age of 349 years old, four Foremost golfers have been teeing the golf ball up together for over 10 years at the Foremost Golf Club.
Led by the oldest in the group Charlie Luca at 97 years old, Wally Granberg (89 years old), Reinhold Karl (87 years old ) and the youngest of the crew Larry Wolfe at 76 years old, the avid golfers come for their round everyday at 1:30 p.m. and then sit in the clubhouse around 3:30 p.m. for awhile to have coffee before calling it a day.
“Now that I’m in my 90s I insist on having a little nappy after lunch,” chuckled Luca on the specific tee-off time.
Luca golfs all year around as he is a snowbird that goes to California every winter where he hits the local links, before coming back in time to be back with his playing partners in the spring time.
“Well because the golf club is right here and it was a sport we could take part in. I suppose that’s why we chose it,” said Luca.
“It’s also a nice sport where you can only be angry at yourself. It’s really a good sport in that respect.”
Luca says the foursome golfs everyday pending the weather and other commitments.
“Anytime we’re free, we come out here and play,” said Luca.
“It’s maybe two of us, three of us, sometimes there (are) six or seven of us and we break up into two teams.”
The game of golf made it easier to get together because they all live in the small town, and in their younger years the guys have played fastball together.
“I sort of drifted into it because it was something you could never be good at,” said Luca.
“You always think ‘I know what I did wrong and I’m going to correct it the next time.’But it doesn’t work out that way.”
Luca chuckled when he was asked about is favourite memory at the golf club and his response was “I got one over on Larry once and I won’t forget that. Otherwise we just have fun, the dumb shots we make and stuff like that. Sometimes we make some good shots and that’s what keeps us coming back.”
Luca says he still plans to pose a problem for the guys yet.
Wolfe made a humourous remark when he was asked why he keeps coming back with his golfing friends.
“He (Luca) keeps wanting to beat me,” laughed Wolfe.
“I enjoy it and it’s relaxing and something I’ve always enjoyed playing, playing golf.”
Wolfe was a part of the building process of the course in 1976 when water was installed in the fairways and proper greens were built in the late ‘80s.
“It was just all us farmers that built the greens and said ‘We couldn’t do it,’ and we did,” he said.
Granberg lived in Foremost all his life and gradually got into the game of golf and enjoys going out with the guys.
“It’s our golf course I guess,” said Granberg on the special bond with the other players.
“It’s fun to be out in the open.”
Granberg says the four of them are called ‘the Shriners’ because they all go out in their separate cart and off they go on the golf course.
“We play faster because your ball is over there and you can go over there. You don’t have to go pick up the other guy or anything else. It works out pretty good,” he said.
Karl says while he feels his age is catching up to him, it’s the group that brings him back.
“I don’t like golfing alone,” said Karl.
“It seems like the interest isn’t there and (when) you’re with the group it’s fun. Charlie sets the example of how people can get through life and enjoy it at any age. I think we’re all trying to get there at his age. That’s what keeps us coming back. It’s competitive, we want to be there.”
The clubhouse has recognized Luca with his very own breakfast menu item called “Charlie’s Breakfast.”