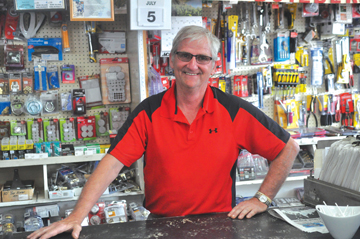 Correction had to be made in the story: In the July 9 edition of the Commentator in the article “ No vacancies in one Bow Island motel for a little while,” it said the restaurant and liquor store were leased out when in fact that is incorrect. The liquor store is not leasesd out. Also the article said Henry Kerner is the owner of the Silver Sage Motel when in fact he is an owner along with Alda Kerner, Dale and Darla Hunt and the liquor store is managed by Rita Stevens.

Travellers looking for a hotel room in Bow Island over the summer months and into the fall might one to keep driving as one of the motels is completely full with the ongoing Whitla Wind farm construction.
“We’re absolutely full now,” said Henry Kerner, an owner of the Silver Sage Motel and liquor store.
“We usually run at about 50 per cent (vacancy), but we’re absolutely full and have to turn away people who can’t make reservations. It’s been well over a month.”
Hunters who have been staying at the motel for 20 years have been phoning in for reservations and have been turned away, he added.
“We can’t give them rooms because we have people in the rooms and we can’t put people out that are in. The rooms are booked until the end of November.”
“We’re getting phone calls everyday from guys that are on the crew and we’re absolutely full.”
While the motel is at capacity and bringing in business, the work is always ongoing.
“It’s just as much work because we’ve got to clean the rooms everyday because there is always something to do,” he said.
Both the motel and Capital Power were in contact with one another as the project was announced and Kerner says there were no adjustments the motel had to make and staff were prepared.
“They’re a nice bunch of guys,” said Kerner on the crews.
Kerner says while the liquor store and restaurant are leased out, that they’re getting used lots by the crews.
Bow Island Hardware owner Robin Knibbs has seen a steady flow of wind farm workers coming in and spending but for his company there has not been a big change.
“We’re thankful for the workers,” said Knibbs.
“Sales have gone up with the workers coming in and supporting the town here … Hopefully it snowballs a little more.”
Knibbs says their has not been any challenges other then the quantity of some items on the shelf.
“The only thing is we might stock six items here of something, all of sudden they want 24,” he said.
“What happens is they want it now. They won’t wait one day. If it’s the stuff I normally don’t sell that much of or that I’m losing out on because there is such a big business … that’s what I’m not used to is vast quantities.
“I’ve told them if you could tell me what they may need I’ll stalk it for them.”
Island Market employee Nancy Klassen said the grocery store has seen an increase in grocery sales.
“We’re open a little later for them so they can do a little late night shopping,” she said.
The store is open on Tuesdays and Thursdays until 7 p.m. for the worker’s convenience.
“We been keeping track. It’s like $300 to $400 (more on to those day totals) the one hour we’re open later.”