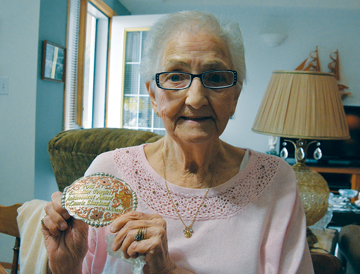 Medicine Hat lost its Queen Mom this week, with the passing of Laurie Sharland.

Sharland, 83, was known for her years of work in the community and in the vital role she played in making the Medicine Hat Exhibition and Stampede Royalty competition what it is today.

“She was an amazing volunteer and an amazing person,” said Shelley Chomistek, who won the local royalty contest and was named Miss Rodeo Canada. “I knew her well and I know how much passion she had for rodeo and rodeo queens.

“She was heavily involved in our contest locally for so many years – what we have now really is her vision.”

In 1971 Sharland was named the co-ordinator of the contest, where she worked with hundreds of young women every year.

“She put in long days and she went everywhere with the girls,” said Chomistek. “She did everything with us and for us, and because of her dedication, the competition is where it is now.

“Our competition is seen as one of the best in the country – that’s thanks to Laurie.”

Sharland was born on July 23, 1936 and passed away Thursday, just 13 days before her and husband Len’s wedding anniversary.

Chomistek says Sharland was a great human being all around.

“Everyone respected her,” she said. “Laurie had a strength about her and she was extremely loving and caring. She was so strong.

“What I liked most about Laurie is that she treated everyone as special. It didn’t matter your age, background, employment – she made you feel special and she always remembered everything about you.”

Hatter Kole Dalgleish was the Stampede Queen in 2000 and says Sharland made a huge impact on her life.

“I’ve known Laurie since I was nine years old,” she said. “She is the most giving human being – she has given so many hours to this community with her husband.

“She was definitely a truth teller. If she felt you needed to hear something, she would tell you.”

Dalgleish, an entrepreneur, says knowing Sharland made a big impact on her.

“She was the definition of a true lady,” she said. “She always had dignity and class.

“She wasn’t afraid to be the only woman in an old boy’s club and she has had a huge impact on my life.”

Dalgleish added that everyone who met Sharland will remember her.

“She was always there to support us and guide us – no matter what,” she said. “She was always wearing her gold necklaces and had a handful of rings – she would always give you a squeeze and tell you that you could do it.

“She always had her lipstick on and had a bag of it in case ours wasn’t bright enough.”

In a 2016 interview with the News, Sharland said she was proud of many parts of her rodeo life, but was most proud of how she helped the growth of hundreds of young women in the city and province.

“I’m very grateful to the girls,” she said. “We only had one daughter, but we always felt we had lots of daughters, because all the girls kind of became daughters.”