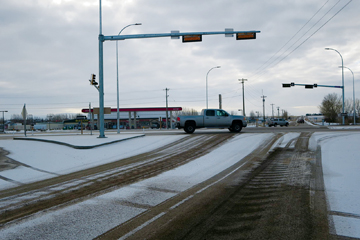 A MUCH SAFER ROAD: Traffic lights are installed and operating at the intersection of the Trans-Canada Highway.

The Dunmore intersection project came to end with the warming up of the traffic lights on Jan. 21.
The intersection improvements began back in August 2020 and included traffic lights on the Eagle Butte Road and Charles Street sides of Highway 1 and a stop sign being placed on the northbound side of Eagle Butte Road ahead of the intersection to ensure the fair flow of traffic for those drivers trying access the intersection at Third Avenue.
Additionally,light illuminations were completed, radius and widening improvements were done to the southeast corner, a radius improvement was constructed on the northwest and northeast parts of the intersection, a widened median opening and west bound lane widening was also done.
“Cypress County Council, past and present, have been advocating for numerous years to reduce the risk at the Dunmore intersection,” said Cypress County Reeve Dan Hamilton, in a Thursday press release
“Alberta Transportation agreed in late 2018 to provide a solution for reducing the risk to users of the intersection, and further agreed to match the County’s financial contribution to complete the work. Many options were looked at, such as the County proposing the extension of Third Avenue to meet Highway 1 east of Dunmore. However, Alberta Transportation made the decision that the intersection lights and adjustments alone, were the best course of action”
In November 2019, Cypress County Council voted to cost share the $1.2 million project with Alberta Transportation. Alberta Transportation contributed $400,000 to the intersection upgrades and the rest came from the county’s municipal reserves.
Drew Barnes, MLA for Cypress-Medicine Hat has previously talked about the collision prone area.
“Planning, construction and financial partnerships to ensure Albertans receive the infrastructure, safety and growth required are essential,” said Barnes. “I am pleased Cypress County’s representatives managed their finances and their priorities in such a way that the taxpayers of Cypress could partner with Alberta Transportation to make this happen.”
The intersection is one of the main crossroads for the community with Eagle Butte Road leading to a school. There is a Co-op gas bar on one corner and transport trucks use the intersection to access the light industrial area and the Richardson Pioneer elevator.
For a long-time residents had raised concerns about the intersection. By 2006 there had been three fatal collisions in the previous two years.
At that stage Alberta Transportation felt the volume of traffic did not warrant traffic lights on a major highway. Very large stop signs were then installed and the speed limited reduced to 80 km/h through the hamlet.
With files from Gillian Slade, Alta. Newspaper Group