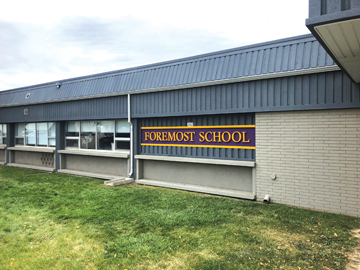 Foremost School students began the process of building a fitness centre inside the school for its students recently.
All students at Foremost and Oyen Public Schools will be able to enjoy the new additions to thier buildings in the near future.
Prairie Rose School Division strongly believes in facilities upgrades as a priority and the fitness centre idea came to be with discussions between principals, parent councils and communities at large and identifying needs.
“In different places, it might look different,” said Reagan Weeks, PRSD’s assistant superintendent.
“But in Foremost, we really felt that this training centre would be well utilized by the school community.”
Weeks said it was noted at Foremost School—which traditionally has been a school of athletic excellence—that there was need for a training facility that allowed students to reach their full potential athletically.
“The training centre really is dedicated to helping maintain a higher level of fitness and we also know that in some of our smaller towns, there isn’t necessarily access to community centres or facilities with expensive gym equipment,” said Weeks.
“This will build that gap. We’re also hoping to work with other community organizations that might have a need for such a thing as well. So, really looking just to enhance both the school and the community at large in terms of wellness.”
Weeks says the equipment looks similar to what you would see in any gym.
The PRSD maintenance team has all sorts of skills and are the ones who build the training centres.
“They’ll come out to a site, have conversations with school administration and teachers, get a good sense of what it is they’re looking for and then survey available space and then move forward based on what they find out, ” said Weeks.
“For example, in Foremost, there was under-utilized spaces right within the school. They selected one that they felt would be large enough and meet the need.”
Every sport will have the opportunity to use the space, added weeks.
The other component that PRSD is trying to implement is the usage of outdoor rinks.
“Basically what happened is given the restrictions and the protocols that are in place by Alberta Health Services— the idea of using outdoor rinks to ensure that we’re keeping people physically active and moving and also outside in the fresh air was really appealing, said Weeks.
“In Oyen, they had put together a plan to work on the outdoor rink. Foremost already has an outdoor rink, but we’ll work with them to see what we can do, if there’s anything we can do to enhance that.”
The goal is to have kids on the outdoor rink during physical education and fitness classes when possible.
“(There are) (a lot) of times our schools already have—with our physical education classes—gymnasiums (that are) already full,” said Darren MacMillan, the Hockey Academy’s general manager.
“When Hockey Academy is scheduled and we have our dryland training time, a lot of our schools don’t have access to facilities. This really tried to allow for a space to train outside the gymnasium.”
MacMillan said there may be a couple days a week during that class period that is designated for the Hockey Academy.
“We want them to have a place that they go to for their dryland training— that they can be excited to go to, to get that hockey-specific training,” said MacMillan.
Prior to the fitness centre concept, the Foremost Academy used a smaller auxiliary gym when they had access to it in the school’s timetabling.
Training facilities have been built at Irvine and Redcliff’s Parkside School.