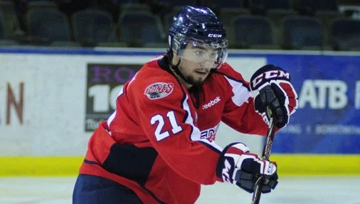 Photo Submitted by Jay Merkley Jay Merkley is pictured here with his time as a Lethbridge Hurricane. He has now transitioned into coaching and is looking forward to the opportunity with the Willie Desjardins South Alberta Hockey Academy.

Jay Merkley stepped on the ice at the Foremost Civic Centre for the first time on March 15 as Foremost School’s new head instructor of the Willie Desjardins South Alberta Hockey Academy.
Merkley had to make a quick transition as he ended his teaching contract in Lethbridge on March 12 before making the trek to the Village for the new opportunity.
He participated in the SAHA open houses in Bow Island and Foremost on March 13 before he could solely focus on the Foremost players last Monday.
“(I) kind of went in today (March 15) and got situated at the school and met some of the staff, and we were actually on the ice this afternoon,” said the former Lethbridge Hurricane.
“It’s good. That’s kind of the way I wanted to do it; I think that’s the best way to do things is just hop in feet first. The kids were super receptive and we did some drills to kind of see where everybody is at.”
He looks at the Foremost opportunity as a “dream position.”
“I took the job mostly because it’s something I’ve always dreamed of doing and having the opportunity to both coach and teach—which is my two passions as of right now —it’s really the dream,” said Merkley.
“I’ve been teaching kindergarten for the last two years—which is my passion. I love teaching kindergarten, but when something like this comes up, it’s really hard to pass up. Right now, I’m teaching and working in different classrooms doing some Grade 6 (and) Grade 2/3. I love that it’s a K-to-12 school too. I love the idea of being in a rural school—that’s also been kind of a dream of mine as well.”
He grew playing minor hockey in Calgary before making the jump to the Lethbridge Hurricanes at 16 years old and then the Swift Current Broncos to end his junior career.
Merkley decided to forgo his 20-year-old junior year to pursue his education at the University of Lethbridge.
“I had realized you know you kind of get to a point where you realize you’re not a pro player,” said Merkley.
“I decided to go to university at the U of L and play hockey. I knew I wanted to be a teacher, so it was the perfect fit and the U of L was great too. We weren’t super successful as a team—our records weren’t awesome when I was there. But just that experience of being a student-athlete and kind of having a more balanced life.”
He obtained a combined Bachelor of Arts and Education degree at U of L.
While Merkley has not coached actual teams, the 25-year-old has been working on being a skills coach for the last four years.
“It’s just like what’s in teaching— everybody is going to get to different points with things and I want to provide these kids with an opportunity to learn the game of hockey and enjoy the game of hockey and get their max potential out of it,” he said.
Merkley has picked up tips from brother, Nick, who is in the New Jersey Devils’ system and he has taken note on some of those skills to transfer into coaching the Academy kids.
“You know watching his games and watching NHL games, guys are so fast and they do things at such a high speed,” he said.
“So really pushing high speed, (a) lot of skill work as far as stick skills (and) the shooting one… But teaching skills that are applicable to games. Taking skills, teaching them and then giving small-area games or applicable times to use these skills.”