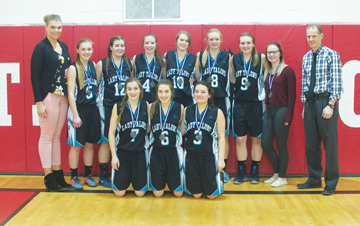 By Justin Seward
The Senior Lady Talons basketball team had a tall task of beating the Number 2 ranked Monsignor McCoy Colts in the league final on Thursday Night. The Colts took advantage of the Talons defensive miscues en route to a 70-37 win.
“Anytime you can get a win in your home gym, it’s great,” said Colts head coach Janice Laing.
“It’s one step.  I think we don’t feel like the season’s over. I thought Eagle Butte played real well. They out rebounded us again and I felt we struggled with their athletic presence on the boards.”
Talons head coach Mark Heinricks knew the Colts were a great team but he was disappointed with the girls not defending well and giving their opposition a stronger game.
“We wanted to make their life a little more difficult than what we did,” said Heinricks.
“They have a better game in them then that. These girls won’t quit. We’ll be back in the gym and focus on out defensive game again.”
The girls  booked their ticket to league final with a nailbiting 57-47 over the Crescent Heights High School Vikings last Tuesday night. The Talons came out of the opening tip-off slow, but were able to recover down the stretch with strong ball control and forcing the Vikes out of their comfort zone.
“We came in knowing that this our gym and we wanted to take that win,” said post Katie Arnott.
“We really felt that defense is what wins ball games. For us, offense is always good but defense is honestly so important in order to win a game like it’s crucial. We just came out knowing that we needed to play good defense and shut down their good players.”
Rebounding was pivotal for the girls because if the first shot wasn’t made then they were able to come down with a foul and were effective at the free throw line.
The girls will open up zones against the Vikings on March 10.

Senior Boys
The Talon senior boys lost a heartbreaker  64-63 to Brook’s  St. Joseph’s Collegiate with 30 seconds left in the game in last Tuesday’s semi-final game on the road, ending their postseason.
“We just didn’t get any breaks and the boys played their hearts out,” said assistant coach Troy Tucker.
The team will have the task now of trying to defeat zone host McCoy in the first game of the South Championship on March 10.

Junior Varsity Girls
It was the tale of two halves for the Junior Varsity Lady Talons  as the team saw a 32-19 half time lead nearly evaporate to the Duchess Eagles during quarterfinal action last Wednesday night at Eagle Butte. Despite the Eagles outscoring the home team 31-25 in the second half, the Talons held on for a 57-50 win.
Coach Hailey Henderson said to her team  while the Eagles were making an onslaught of baskets that they needed to slow the play down, keep passing the ball around and work as a team.
“It was really crucial because we wanted to keep playing and we didn’t want the season to be over, it was really important to pull up our socks and play how we can play,” said Henderson.
The Lady Talons continued their playoffs on Monday night against an undetermined opponent in the semi-final and results were unknown at press time. The league final is slated for Wednesday night.

Junior Varsity Boys
The Talons junior varsity boys team had a tough evening as they lost 74-39 to Brooks Composite High School during the quarterfinals on March 1.