Former mayor gets Bow Island council’s chambers renamed after him 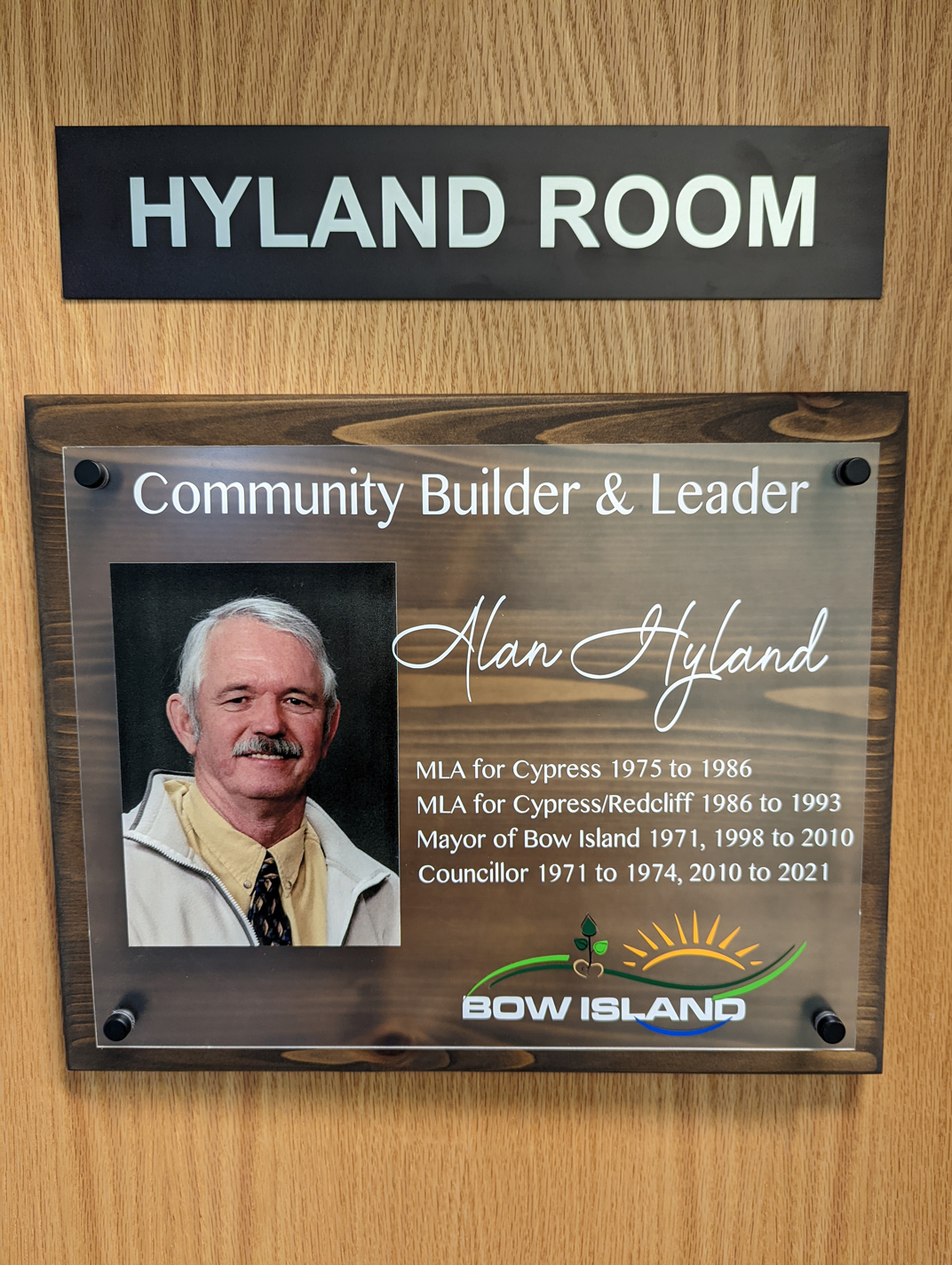 A picture of the dedication plaque now outside Bow Island’s Hyland Room and council chambers.

At the end of the last council term, three members of Bow Island Council retired, but that does not mean their time in service to the community is forgotten. And in the case of former Councillor, Mayor and MLA Alan Hyland, his legacy has been immortalized in the recently renamed Hyland Room.

At the recent August 31st Town Council meeting, Bow Island Town Council made the decision to rename their council chambers in a small ceremony.

“We wanted to do something to recognize him and his efforts and show our appreciation for all that,” said Mayor Gordon Reynolds. “So when people enter the rear part of our building where our meeting rooms are on a plaque on the door with the listing of his service. So that reminder is there for folks.”

Hyland began his career in local politics as a councillor and mayor in 1971, said Reynolds.

“He decided to run for the PC party in the 1975 election and was the MLA for Cypress from ‘75 to ‘86. And then they re-drew the boundaries and renamed the riding and so then it was MLA for Cypress–Redcliff, from ‘86 to ‘93,” said Reynolds. “He was essentially retired, but rejoined Council in 1998, and was mayor until 2010. And then was a councillor from 2010 to 2021. So a lot of years of service to the community not only at the political level, but also you know, as a volunteer with the Elks, with his church. Really is a Bow Island boy born and bred.”

The idea began in October, and simply took time to put together, said Reynolds, including getting the dedication plaque made and finding time for Hyland and his wife to come out for the ceremony.

“He has given us a lot of his time and effort to the community,” said Reynolds. “And we just felt that it might be a small token in a way.”

“He was in government, in the provincial government during some difficult situations,” said Reynolds. “When the provincial government decided to back in the late 80s, early 90s decided to get rid of the debt, which meant cutting a lot of costs and services programs. MLAs like Alan took a lot of heat. But regardless of your political stripe, you can’t argue that he didn’t work for this community. And as an MLA, he certainly gave a regional perspective, looked beyond the town’s borders and understood that southeast Alberta plays an important role in this province, and I think when he came back to serve on council in later years, he brought that perspective with him.”