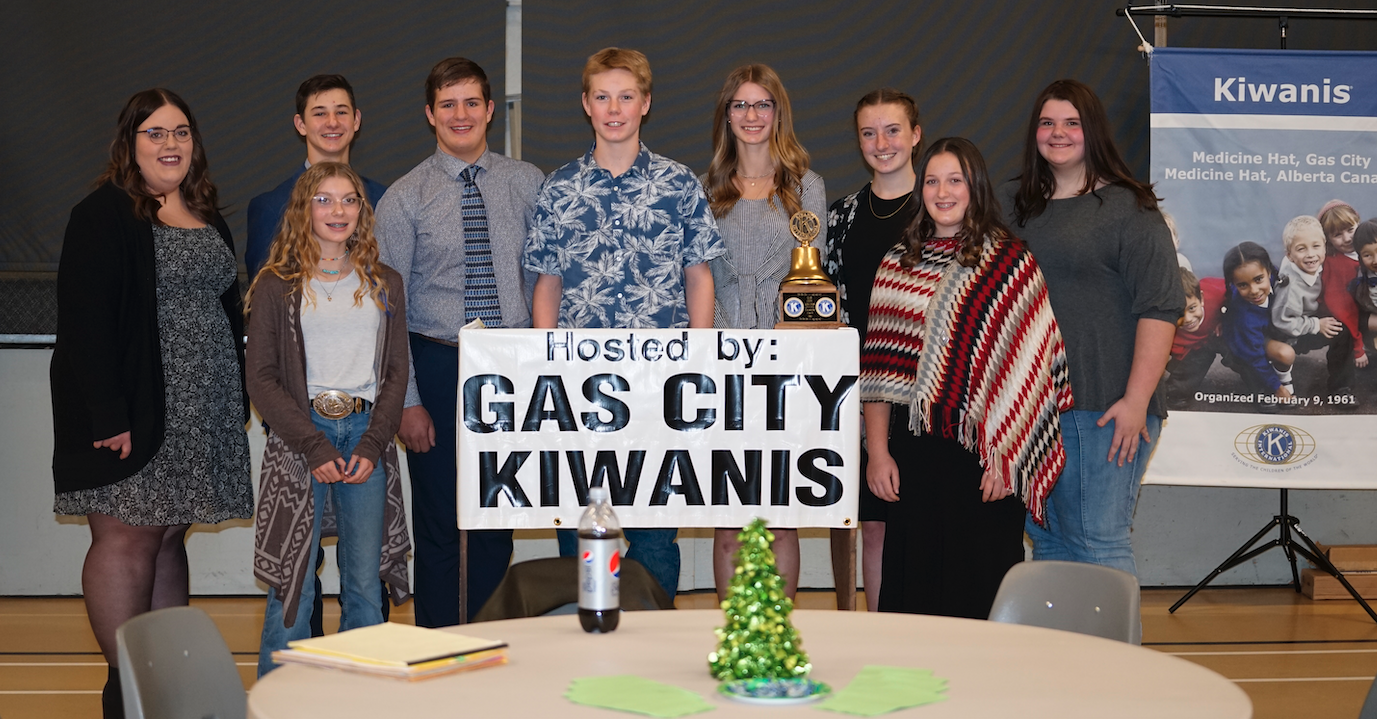 Nine candidates from the 4-H clubs within the Cactus County 4-H District came together at Seven Persons Hall on Wednesday, Oct. 26 to give speeches in their bid to win the Norm Payne Award. The award is only open to members of a 4-H club, who must be nominated by their club and have a letter of recommendation from a 4-H leader along with another 4-H member. The Norm Payne award was started in 1974 and this is the 48th year it has been presented.

Bill desBarres, immediate past president of the Gas City Kiwanis Club, explained the creation of the Norm Payne award. “Norm Payne was a member of the Gas City Kiwanis Club, very involved with youth and 4-H. He was the manager of the dairy that used to be on MacLeod Trail in Medicine Hat. When he passed away, they wanted to do something that would carry forward his youth activities.”

desBarres thinks of Gas City Kiwanis, one of three Kiwanis Clubs in Medicine Hat, as a doer club. They created Safety City and the Gas City Kiwanis Centre and are deeply involved with youth, including but not limited to 4-H and the Norm Payne Award. “We include 4-H members in various projects and try to recreate the development of youth within the community and giving them opportunities.”

Each of the candidates chose a number out of a hat. Waylon Watson, of the Generations of Tomorrow 4-H Club, was the lucky gentleman who was first. Watson titled his speech, If You’ve Eaten Today, Thank a Farmer and delivered a well-thought out and detailed speech. At the end, he added, in addition to a farmer, thank an engineer, scientist and biologist for giving us the tools to feed our world.

Reid Vossler from Irvine 4-H Beef Club has been with the club for seven years and lives on a family farm owned by his grandparents. He spoke on the history of tractors, starting with Ford producing the first mass produced tractor in 1916. Vossler is a Case man and his speech was littered with amusing tidbits, such as, “if Chevy produced one, it probably wouldn’t run.” There were many references to how much better Case tractors are compared to John Deere and he finished his speech with three jokes.

Dealing with a more serious matter was Riley Munsch, also with Irvine 4-H Beef Club, who spoke about cancer. The five most common types, reducing the cancer burden, and preventative measures. The topic was close to her heart, having lost a Grandpa to cancer and, in 2018, her aunt, who was only 40-years-old.

Paige Munsch, from the Medicine Hat Multi 4-H Club, followed with her topic of having a farm at your school, referring to the Agricultural Discovery Centre at Irvine School. She was secretary of the executive and spoke about the experience and how rewarding it was, finishing with highlights from the Fall Production and Sale fundraiser in September.

Ava Dyck, from Seven Persons Beef 4-H Club, starting off by asking the audience if any had ever played a sport or been involved with an athletic team. She outlined the benefits to character development, how sports teach patience, leadership, respect and teamwork. She quoted studies that prove playing a sport helps students do better in school, reduces anxiety, and aids sleep.

Dannica Beck from Generations of Tomorrow 4-H Club told the crowd about the relationship with her great-grandfather, a veteran of WWII. Born in 1922, he celebrated his 100th birthday in June of this year. He was a good shot and enlisted in 1942. After a landmine blew up, he ended up on the Lady Nelson Medical Ship where he discovered, from reading an old magazine, that his sister, who he’d lost contact with, was in living in New York and part of a jazz band. He managed to track her down and they remained in contact for the remainder of her life. After the war, her great-grandfather worked for Alberta Transportation and was a strict driving instructor. Beck talked about the valuable relationship she has with him, how she visits him regularly and often plays piano and sings for him.

Makaya Porteous with Generations of Tomorrow 4-H Club started with her poetic recipe for living on a ranch. She stated she puts her heart into everything she does on her family’s operation, which produces corn silage, has pastureland and cattle, relating how she recently learned to drive the feed truck. She and her sister now raise goats for meat production and she now has her own horse, Sidney. Porteous finished by saying, “I’m from the country and I like it that way.”

Madison Kearley Cody with the Medicine Hat Multi 4-H Club spoke on kindness, how there isn’t enough of it and the world would be a better place if it was more abundant. She discussed how the brain releases dopamine when a person is happy and how being kind to others can trigger this response. The power of kindness is very powerful, she said, and prevents the world from falling apart.

Ward Murray, from Seven Persons 4-H Beef Club, was the last speaker in the formal portion and ended on a lighter note. He started by listing famous people who were left-handed, including Babe Ruth, Leonardo da Vinci and Napoleon. He wanted to explain how being left-handed was always right and that he wouldn’t let it get in the way of his social life. Murray related how left-handed people were often outcasts of society, being viewed as witches and sorcerers in the Middle Ages. How at one time, left-handed children were taken to doctors to test for brain damage. He then went on to explain why left-handed people recover quicker from strokes and that 30% of those who play pro-sports are left-handed.

The impromptu speeches followed, all candidates leaving the room and coming back one at a time, in a different order from the prepared speeches. They weren’t allowed to use a microphone for the second half as projecting their voice was part of the judging. The question given to each candidate was: Alberta is set for a provincial election in May. What do you see as important topics from the viewpoint of Alberta youth in this upcoming election? Why are they important to you? The candidates had 1 minute and 15 seconds to prepare and two minutes to speak.

Vossler spoke first on equality, kindness, giving back to communities, reuniting all Albertans and why abolishing taxes was the right thing to do.

Paige Munsch discussed helping farmers in our area, especially with fuel and other prices increasing. She asked how they would help our economy and that a strong leader is like a base and if you lose it, everything crumbles.

Beck said it was important to know where our resources come from and the value of putting in the time and effort to get what you deserve. Knowing where her food comes from, the land she lives on and getting a job are all important to her.

Murray was concerned about the government raising the driving age as he feels it would mess up the rest of his life. He went on to outline how not being able to drive would impact his extra-curricular activities.

Riley Munsch talked about the importance of education and how it prepares the adults of tomorrow. She moved onto the availability of healthcare, how increased taxes creates more debt and more government aids are needed, particularly to farmers.

Dyck talked about pipelines and the importance of the oil and gas industry to this region and how it should be developed. She advised to choose the next leader wisely, picking one that cares about our economy.

Porteous wants the next leader to bring this region and the world to a better place. They need to know how to properly govern and it is important they are a strong speaker.

Watson, who started everything off, brought it to a close. Asking what we think about, what we want and what is our future in life. He is going to college next year and is considering his career options and wants the best future possible. He finished by saying kids are the future adults and we need a government with a strong backbone for progressing businesses.

Following the speeches, Shirley Elliott, key leader of the Cactus County 4-H District, spoke about how these types of events bring the district together and promote more community involvement.

Several Kiwanis members were at the evening, along with Alvin Pederson, the lieutenant governor of the District 8 Western Canada Division of Kiwanis, which encompasses Medicine Hat, Taber, Brooks and Lethbridge. Pederson commended all the nominees for a job well done. He also made the savvy observation that five out of the nine candidates this year are left-handed.

The winner will be announced at Colour Night, which takes place in Hilda on Saturday, Nov. 19. Along with a trophy, there is a $1,000 cash prize, the winner gets $600 and the representing club gets $400.