Strongman playing Blues at the Bow 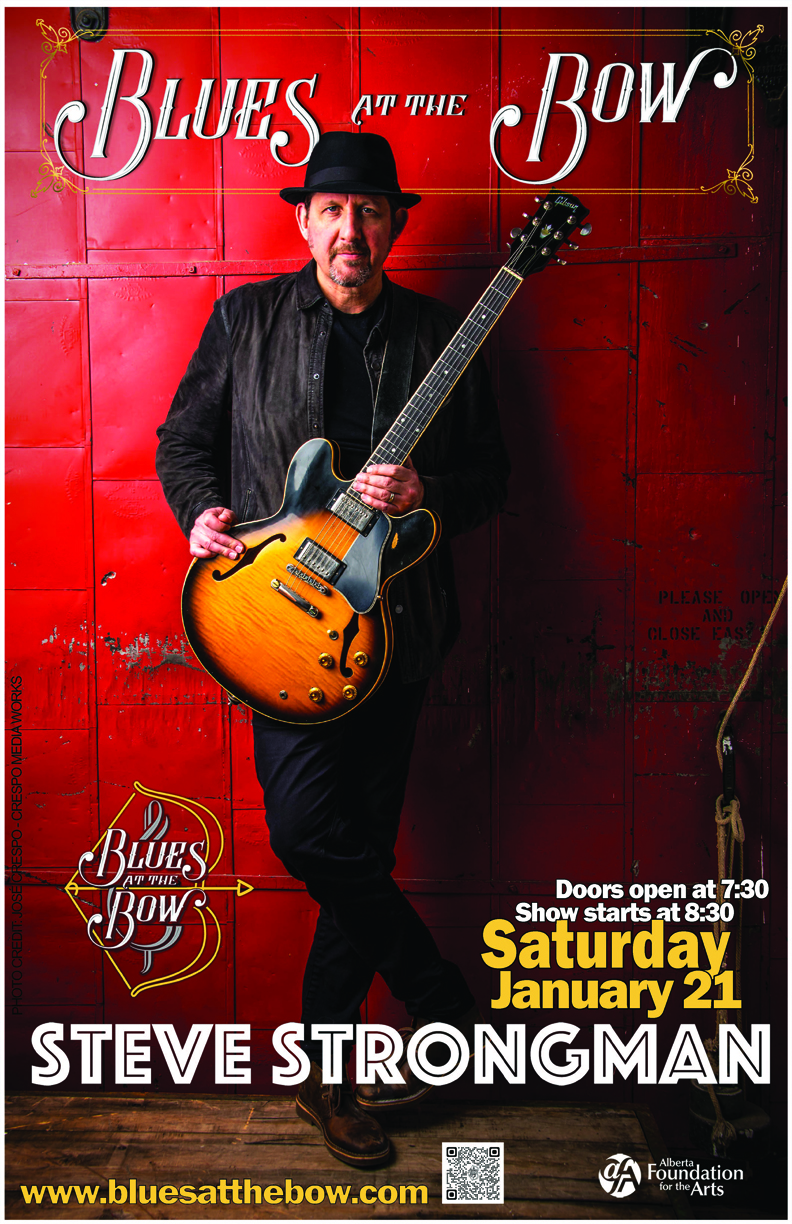 Juno Award Winner Steve Strongman will be performing live at the Blues at the Bow in Bow Island Jan. 21 with doors opening at 7:30 p.m. and the show starting at 8 p.m.

Beyond Strongman’s talent as a songwriter, guitarist and front man is his ability to engage his audience and deliver an outstanding performance at every live show.

With his inimitable guitar playing and soulful vocals, Strongman delivers incredible performances with power and passion. Steve Strongman has a way of stirring a crowd that evokes the emotion, maturity and authenticity of classic blues themes. His music speaks for truth and passion, and offers hope for the soul in the face of hard times in a way that leaves audiences craving more.

His talent is huge and impossible to miss, and it’s matched by his staggering musical ambition — as guitar-slinger, songwriter or vocalist. The same structures and progressions that animate blues and roots music can also choke the air out of it, smothering it in caricature and cliché. But Strongman is a subtle shape-shifter who manages to slip that trap without betraying the music he loves. Throughout, he never sounds an inauthentic note or loses touch with the essence of the blues.

The 2019 release of Strongman’s 7th studio recording “Tired of Talkin'” is destined to further establish the guitar slinger’s reputation as one of the most exciting artists on the International Blues scene.

Strongman’s impressive resume includes stints opening for guitar legends such as B.B. King, Buddy Guy, and Johnny Winter. The performer’s breakthrough 2012 release A Natural Fact was hailed as a standout, earning Maple Blues Awards for Recording, Songwriter, and Guitarist Of The Year as well as a 2013 Juno Award for Blues Recording Of The Year.

In 2014 he was thrice-nominated at the Maple Blues Awards (Guitar Player, Electric Act, and Entertainer of the Year) and in 2015 received a second Juno nod for Blues Album of the Year (for Let Me Prove It To You).

In 2018, No Time Like Now, was a Juno award nominee for Blues Album of the Year and in 2019, Strongman won Best Guitarist for the Solo Duo Category at the International Blues Challenge in Memphis, TN. His 2019 release “Tired of Talkin” is earning rave reviews and showcases why Strongman is one of the most exciting performers on the scene today.

Blues at the Bow provides an incredibly unique, live entertainment venue that has been bringing Grammy, Juno, W.C. Handy Award, and International Blues Challenge award-winning and nominated artists to the southern Alberta area. Over the past few years we have provided an amazing line-up of award-winning artists like Colin James, Jack de Keyzer, Roy Rogers, Romi Mayes, Paul Deslauriers, Colin Linden and The Harpoonist and the Axe Murderer, to name only a few! With sold out concerts for the majority of our shows, this next concert at Blues at the Bow will be another one of the greats, so don’t miss out!

The following links are available if you want to take a further look at this incredible artist http://www.stevestrongman.com . If you want to know more about the show at Blues at the Bow http://www.bluesatthebow.com or to purchase tickets go to https://www.eventbrite.ca/e/steve-strongman-live-at-the-bow-tickets-482704631547?aff=ebdsoporgprofile