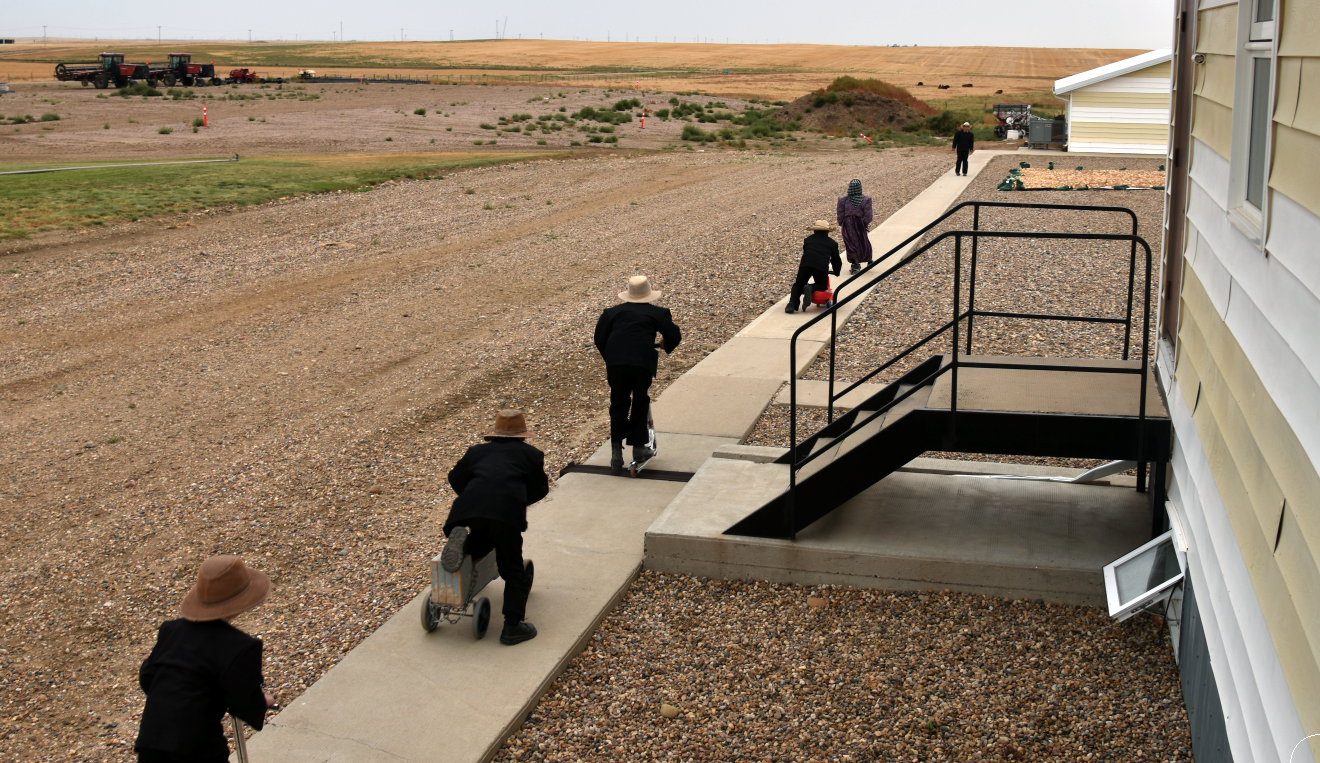 For some teachers, the idea of teaching at a Colony School can be daunting. But for those who have made the leap to become the english teacher for the next generation of a Hutterite Community, many wouldn’t have it any other way.

These one-room school houses boast roughly 15–30 students across grades 1–9 and occasionally kindergarten, depending on the youth population of the colony at the time, said Nicole Merrick, the current teacher at Elkwater Colony for the past five years. Prior to her current position, she also taught at Mayfield Colony, as well as various public schools over her teaching career.

Merrick says that while the school population is small, being the only English teacher in the building still keeps her on her toes.

“The biggest thing in colony teaching is that people don’t understand that we run the whole school like we are the teacher,” said Merrick. “And so it’s not just the full time teaching mode that we have, we also are full time administrators, because we are our own principal. So it’s, we’ve got smaller numbers, which makes it a little bit more manageable, obviously. But we do both of those roles in our we can’t you know, we can’t send a school or send a kid to the office because they’re misbehaving because we are the office.”

Colony teachers are full teachers, adds Maureen Buday, teacher at Roseglen Colony. She notes that there can be a misconception that those who teach at the colonies aren’t “real teachers,” or that they had somehow been exiled there after an issue in public school, but the position requires just as much training and skill as any other classroom.

“The English school teacher has to be a master of the curriculum from grades one to nine. Right? And so that involves being extremely planned and organized, which they are,” said Kal Koch, with Prairie Rose Public Schools.

Because all of the grades take place in the same space, often, while still having several different outcomes from the alberta curriculum that need teaching and many different levels of ability, it requires a lot more organization and independence to get done, said Koch, but there is also a great degree of freedom that comes with being the sole teacher present.

“The amazing thing is that you get this freedom to kind of teach in a way that works best for you and the kids. And you get that freedom of, say, if I’ve got a grade three student who’s struggling, then if I need to put them in grade two work, it’s not a big deal, because everyone in my classroom is all over the place,” said Merrick.

While a colony teacher might not have a principal or peers to fall back on, they do have education aides, as well as the German Teacher, to help keep their students and classroom running smoothly.

The German Teacher is a member of the colony and an elected position, explained Ron Hofer, the German Teacher for Jenner Colony. He’s had the position since 2013, and says that he likes to consider himself a born teacher, as he’s always loved children.

Hofer, like all German teachers, helps the students with their religious education, reciting scripture and songs, as well as their Hutterite history, German language, and grammar. Hofer also manages the garden, where the children spend much of their summers helping.

Once the children in Grade One and higher make their way to English School, his day continues with the kindergarten children, though Hofer adds that he likes to come and check in on the older kids and is available if the English teacher needs any help with discipline issues or needs to ask questions in regards to Hutterite tradition.

“Collaboration is very important. Just to see who’s struggling; because I don’t see, I don’t have as in-depth a day with them as the English teacher. I am there, I can see that too, but I’m not there the whole day. But that’s why I always tried to, with his teacher, communicate about the needs of different children and, you know, talk about different children,” said Hofer.

“I like coming in and just leave it coming about three times a week, and if the teacher is busy, I’ll just walk around downstairs, look at the kids’ work and chat with them a little bit. Try not to distract them from what they’re doing,” said Hofer. “And, but I do enjoy showing up and showing that I’m here, showing them the support that they need. And behaviour issues if they’re there, if you talk about that, and nip it in the bud, sometimes it’s quite helpful.”

For the English teacher, their relationship with their German teacher is vital, as they’re the first line to the colony to discuss if the teacher is unsure if something is appropriate or has an idea they’d like to clear with the community, such as a field trip to another part of the colony, said Buday.

“As a community, we have rules in place about  different situations. And maybe not hard and fast rules. But, you know, tradition, a lot of it is tradition,” said Hofer. “But they do math, science, English, Social, fine arts, and health of the body. There’s, there’s music, there’s singing, stuff like that. It’s all the standard stuff.”

Hutterite schools also do not use much, if any, technology; students learn to research from encyclopaedias and dictionaries, and learn their fundamentals on paper, something that Merrick adds does not hinder the learning of her students at all, and encourages them to be strong and resourceful in the classroom.

Despite these differences, adds Koch, fundamentally Hutterite children are still children, and many of the same joys and challenges are present as there would be anywhere else. He notes that it can be slightly easier to address a whole class on issues or anticipate discipline problems, knowing that their families all have similar values, but kids will be kids.

As wonderful as the experience can be, however, it can also be isolating for the unprepared, and when masters of the curriculum face changes like a new curriculum that’s being implemented for three of the grades they have to teach, it can be concerning.

“We had a teacher that taught in the Taber division, who did a lot of work with lesson planning and integrating  anything that had Hutterite relationship to what we were teaching, he incorporated that into the lesson. So we all use his lessons now,” said Merrick, who expressed worry about some of these lessons being obsolete and having to adapt multiple grades at once, without other teachers to fall back on being just down the hall.

“Because we’re so isolated, we don’t meet very often, we meet maybe five times a year. So it’s not like we can get together every Friday,” said Merrick. “We have to go off of texting and phone calls. There’s 18 colonies in Prairie Rose. And we try to really make sure that we connect with newer teachers and make sure they know that they’re not alone, because it can be very isolating. And remind them like we’re here to help and please ask for help. And you’re gonna struggle, and that’s okay.”

Many of the teachers have long drives into school every day, as was noted by both Dubay and by Hofer, but getting to know the kids from the time they’re six to the time they’re fifteen and build strong bonds with students on the individual level, knowing their strengths and how best to help them, often makes the commute and workload well worth it.