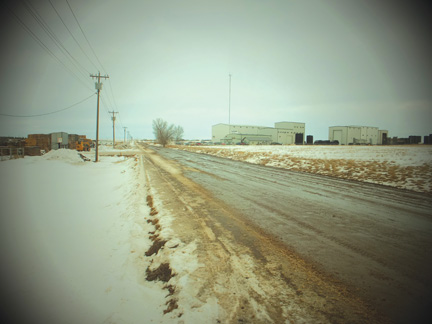 The pavement in front of David Minor's Redcliff business was removed last year and replaced with gravel as a cost-saving maneuver by the Town. PHOTO SUBMITTED BY DAVID MINOR

By Carlie Connolly
The problems with the Town of Redcliff began in 1991 when David Minor moved to Redcliff. When he first arrived, he bought a commercial property and got a license for an auto body and mechanical repairs shop. He claims that not long after, the Town had a problem with his vehicles in the yard missing parts. He said they told him that any cars in his lot that are missing parts cannot belong to him and that he needs a six-foot board fence.
In 2003 Minor was hurt in a car accident, fracturing his spine so he rented his shop out. In 2008, he attended Medicine Hat College and took some upgrading, taking a two-year diploma course on environmental reclamation, and finished with high marks.
“I always work hard at everything that I do,” he said.
He later got into another accident that did more nerve damage and couldn’t work for another two years and decided to teach his son and friends from high school mechanics in their backyard.
He said that his yard goes under the same guidelines as the Highway Traffic Act, where you can’t have more than four vehicles and that all vehicles must be registered and insured with plates. The bylaw officer later came by and scaled the fence, coming along the back to look at the two cars in his lot.
Two years ago, a meeting was held about too many vehicles in his yard, as neighbours were complaining. Minor decided he would move on and rent another building and compound, thinking he would do some mechanical work. When he began working, he remembered the place being a mess with tires piled up and people parking on boulevards. He wondered to himself: where was bylaw enforcement?
He later talked to local businesses who said they had been after the Town for years to clean up the road. They finally cleaned it up, but Minor was on to the next.
His current business, John James Autobody and Mechanical Ltd., which he got in 2014 got him away from the previous mess.
“The reason why I liked it is because the area had lots of land but it had a nice paved street in front of it all the way down way past Platinum. I could road test cars without having to go on the trans Canada, it was awesome.”
The big issue began in May when a woman came in, bringing her father’s show car that was from Arizona. The car had to be brought to him before he could register it, as it was a salvage unit.
The woman was not impressed with the road condition when she came in and Minor was shocked as he knew of his road to be just fine. He looked out and was shocked, as his whole road was torn up.
He went to the Town, and they said that they couldn’t afford to fix it and had to turn it back to gravel. His argument was, there was nothing wrong with it in the first place, so why fix it?
The Town mentioned that in the April 14. council meeting, it was estimated at $150,000 to return the entire oiled road to a good oiled surface.
Option one was approved to go ahead and remove the oiled surface and return it to gravel surface much to Minor’s frustration.
“Why I ever bought another business in the town of Redcliff, I question myself everyday. It has crippled our business big time,” he said.
Minor is a licensed mechanic for automotive, heavy-duty truck and coach and has his auto body technician’s license. He started mechanics when he was 15 years old when he started his apprenticeship and has never looked back since.
Because he’s licensed in all three trades, he can do the salvage inspections, which is keeping his business alive, but he said that people are not going to drive their nice vehicle down a muddy road.
“Up until this road was torn up, I was doing three, four estimates a day, it was phenomenal, the business. Last week was the first time since then I’ve written an estimate.”
A Town representative did not want to go into any further detail at this time.