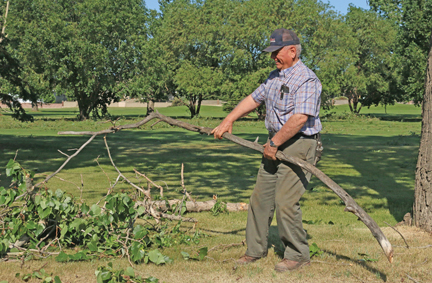 By Jamie Rieger
There is no doubt that the winds that accompanied Friday afternoon’s storm were strong, uprooting many trees around Bow Island and knocking out electricity.
The weather station located west of Bow Island is reported as reading 140 km/hour during the peak of the storm, while Environment Canada’s data report stated 83 km/hour.
“They both may be right,” said mayor Gordon Reynolds. “There was no rhyme nor reason behind this storm. It would uproot trees in on spot and leave the ones right next to it.”
Bow Island golf course was particularly hard hit, losing between 20 and 30 fully-grown trees and a couple of golf carts.
The course was in the midst of holding a charity golf tournament for the  H.A.L.O. helicopter when the storm hit mid-afternoon.
“The golfers had only gotten three or four holes in and the storm came up so fast, some barely got back to the clubhouse in time,” said Lowell Leffler, director of golf operations.
Volunteers were called in to help clean up the golf course on Saturday and more than 20 showed up with their trucks, trailers, and chain saws to help out.
Reynolds said volunteers also helped clean up at the cemetery on Saturday morning.
While there were many uprooted and damaged trees around time, the property damage was very minimal. Reynolds said some tin roofs were lost at the Airport Industrial Park and four power lines were knocked down.
“Because of the fluctuating power outages, we were having problems at our lift stations and I am grateful to our public works staff, who right away got generators going so we would have no sewer back-ups and they spent most of Saturday cleaning up trees on town property,” he said.
Electricity was out in some parts of Bow Island for approximately four hours.