Jean says no money in treasury for drought 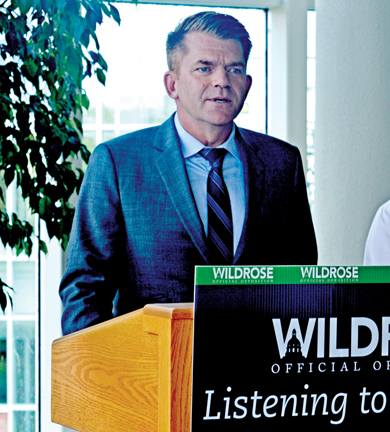 Wildrose leader Brian Jean made an hour-long stop in Medicine Hat last week to talk about rural issues and fiscal priorities in government.

By Tim Kalinowski
Wildrose leader Brian Jean made no policy announcements geared toward helping rural Albertans weather the current drought when he was in Medicine Hat last Thursday. He did, however, have a lot to say about what he felt the current NDP government has been doing wrong on various issues. After touring the city’s newly built berm system, Jean took questions from reporters at Medicine Hat City Hall.
When asked specifically what his party intends to do to help address rural issues such as a lack of high paying jobs, farmers and ranchers facing drought and the struggling oil and gas sector, Jean said the key was to manage the province’s treasury more efficiently and to work with local governments on issues they see as having the highest priority.
“It is about priorities,” said Jean. “There is not enough money to go around right now and we need to make sure the money we do have is efficiently used and goes to the parties that are most needed. All Albertans need the help right now. Without a strong rural Alberta you don’t have a strong urban Alberta. The same is the reverse: If we don’t have a strong urban Alberta we don’t have a strong rural Alberta. We depend on each other.”
When asked if he felt the NDP government’s response to the drought crisis facing Alberta has been adequate, Jean said his party’s agriculture critic had reviewed several options, including a hay freight rebate program, but the Wildrose Party was not going to advocate for any further government intervention at this time.
“We have to find a solution to it. But to actually give hand-outs I don’t think is the answer. In other areas of the province we have more severe drought conditions than in other areas. But I don’t think giving hand-outs is the answer; finding a long term solution is.”
When pressed to explain this hand-out comment, Jean said the government has to think about the needs of every sector of the economy right now, which are all struggling to varying degrees, not just alleviating a specific need by paying out in the present.
“What I said was we need to find a long term solution,” said Jean. “The government’s responsibility is to make sure these farmers continue in business just like it is our government’s responsibility is to make sure our oil and gas sector is thriving and our small business sector is doing well. All of these sectors in our community are being punished right now with an additional 20 per cent increase in taxes, with an uncertain royalty review going forward and with no idea where they are going to end up on Green House Gas emissions. We have a lot of issues in this province right now.”