Country church that keeps faith for all 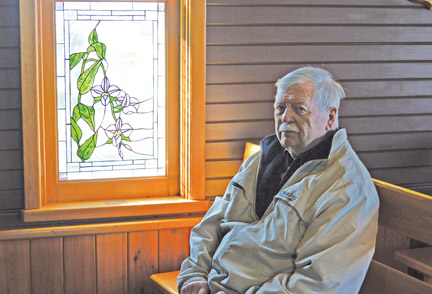 By Tim Kalinowski
Faith like a tree can take many years to grow. Over the course of his life the Rev. David J. Carter has done many good works and walked down many paths, but it wasn’t until he decided to move back to the Cypress Hills, giving up the life of a successful, provincial politician in the big city, that he began to hone in on what has made faith so transcendent throughout his life.
“It is a haunting,” says Carter. “That in this life we have lost any kind of a firm basis for what lies ahead. We want to believe there is a power somewhere and we are not just living like the life of an ant, and then we are gone. I enjoyed my time in politics as Speaker, but it’s comforting to be here now and know the place where I will be buried. It’s because of the hills, in part. I know how special a place it is and know how fortunate I am to be here. And fortunate, in many respects, to be inheriting the ministry of my dad. It’s peaceful and beautiful, and this is pretty much where I find my home in the world now.”
Carter still travels throughout many Anglican parishes in both southeast Alberta and southwest Saskatchewan despite his advancing years. But the parish where his heart lies is the historic St. Margaret’s Church in Medicine Lodge Coulee just off the Eagle Butte Road about 70 km south of Dunmore. The church was originally built in 1908 as an Anglican parish, but has long served as a multi-faith place of worship for this isolated area of southeast Alberta.
“It was built as a Church of England, Anglican, but it’s never been operated that way,” confirms Carter. “It was a church built for all denominations. People were walking for miles around to come to church here. Back in those days it wasn’t gravel roads, it was prairie trails. You are going to come by horse and buggy. You are going to come by horse. Or you are going to come by foot. In 1940s this church was used as a community school house after the other school house in the area was burnt down. So it’s operated as both a school house and a church.”
Carter bought the property the church sat on in 1968, remembering fondly the time his father, Archdeacon J.W. Carter, ministered there. The church had largely been forgotten when the property was transferred from the Archdiocese of Regina to Calgary and eventually sold. But Carter remembered. And, in 1976, he and his neighbours began the effort to restore the church.
Carter donated the land the church, and cemetery beside it, sat on to the Medicine Lodge Coulee Historic Heritage Society to hold in trust. Carter still presides over masses at St. Margaret’s five times a year, and many still use the church for weddings and funerals. For many years now Carter and his wife Jean have looked after the church, cemetery and grounds as on site caretakers.
“I am the unpaid clergyman,” says Carter with a laugh. “We do take care of the place. Now that my wife is ill, I am also the guy that washes the floor and all that stuff. But that’s fine; it’s a labour of love.”
Carter often walks through the grounds or prays in the church to find his peace. He knows the story of every person buried in the cemetery. And he will gladly tell anyone who has time to listen about the history of the church and the surrounding area.
“I see God everywhere,” says Carter. “When I look out that door and look at the Cypress Hills it’s one of the doorsteps to heaven, I think. I am at peace here because it gives me time to reflect. It also gives me time to restore my batteries, which always seem to run down a little faster the older you get. God is god of joy and peace; and there is certainly peace here.”
Carter says he maintains an open door policy at St. Margaret’s for anyone who is driving by or wants to come down for a visit.
“We have people from all faiths and no faiths come. We have the picnic tables out here, and we’ve got the only outhouse between Dunmore and border. It even has a padded seat, and you can sit there with the door open and you can look all those kilometres that way toward Montana. At night, with the stars, you’ve got the universe sitting on your shoulder,” jokes Carter.
Carter says St. Margaret’s continues to mean a lot to all those involved in her upkeep; especially to those with historic family connections in the region.
“I think for most it’s a symbol of a bygone era. The church was a unifying force many years ago and a centre of the community. So it’s a symbol of the past, but it’s also a symbol of a lingering faith; wanting to believe there is something more than this life.”