Freeman on the Land have presence in SE Alberta 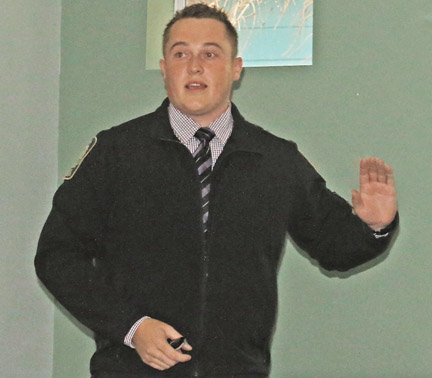 Chris Terry, a peace officer for Parkland County, gives a presentation on the Freeman on the Land movement in Bow Island last week.

By Jamie Rieger
A movement of people who oppose authority, are against the government, and will fight back against the ‘establishment’ is growing in Alberta and rural areas such as the County of Forty Mile and Cypress County are not immune.
Chris Terry, peace officer of enforcement services for Parkland County gave a presentation in Bow Island last week about Freeman on the Land or Sovereign Citizens, anti-government extremists, that are now present across Canada and have been known to come cross the border from Montana.
“This movement is continually changing and slowly growing. They don’t see a uniform as law enforcement, they feel they have the right to travel without a driver’s license or insurance, and they believe the government has limited or no control over them. By not signing a license, for example, they are not entering into an agreement with the province agreeing to abide by the law,” said Terry. “Sovereign Citizens are the people who will come into your municipal office and say they don’t have to pay taxes, water, or other services; then start fighting back.”
What may begin as a squatter refusing to leave a property he/she is illegally occupying and connecting illegally to utilities and water hook-ups, may lead to court appearances, which the Freeman will unlikely attend, or worse, violence.
“They will go into a government building and will surrender all of their legal documents and say they are now a Freeman. We are finding a lot of this in B.C.,” said Terry. “They are willing to kill and be killed for their freedom. In the United States they are deemed as terrorists, but that hasn’t happened yet in Canada.”
While they oppose laws, regulations, and forms of identification required by the government, they will make their own identification papers and even have their own license plates.
“Some actually look like an Alberta plate; they will just put a plate cover over it,” said Terry.
In June, CSIS (Canadian Security Intelligence Service) unclassified a 2012 document entitled, 2012 Domestic Threat Environment in Canada (Part I): Left Wing/Right Wing Extremism. This document indicates that the Freeman on the Land ideology is present across Canada.
“They are over 30,000 strong in Canada. They started in the 1990s and expanded into western Canada in 1997,” said Terry, who has had a number of dealings with Freeman on the Land, or Sovereign Citizens.
“Once they get more extreme, they will threaten judges, government personnel, and law enforcement people and they will become violent. We are askiing people to stop and take a look at properties, look at the character of the property, is it well kept? The character of the property will give you a good idea of who is living there,” said Terry.