Career soldier speaks of his combat service in Afghan war 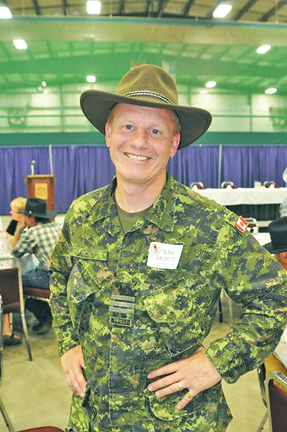 By Tim Kalinowski
Lt. Col. Hackett served until this year as the base commander at CFB Suffield. Many got to know Lt. Col. Hackett and his family in the region in that capacity, but few know he was decorated paratrooper and Afghanistan War vet with extensive combat experience. In 2003 Hackett received the United States military Bronze Star for his work with U.S. forces in Kandahar while in command of A Company of the 3rd Battalion of the PPCLI.
Hackett explains why he decided to join the Canadian army as an officer and eventually become a Canadian parachute company commander.
“In my mind they embodied the excellence of infantry soldiers,” says Hackett. “When you look back on it, the act of throwing yourself out of a perfectly good airplane is a bit of a leveller when it comes to the regard you have for your colleagues, whatever their rank. It became an elevated level of brotherhood that one could identify with. There was also an aspect to it of getting out in front and taking on some of the tasks that others might shy away from. Submariners probably feel the same way. Special Forces also.”
In 2002 Canadians and the rest of the world were still coming to grips with 9/11. The historic significance of what they were doing in Kandahar was not lost on Hackett or his soldiers.
“When we reflect on it, I would like to think there was a degree of exhilaration about it. It came at a fairly significant time. 9/11 had occurred and clearly this was part of the Allied response to the incident, and tracing the potential origin of the terrorists responsible, with Afghanistan sort of first on the hit list. You had this feeling like you were part of history. I think about the memories of the different missions we had done, or in many cases the degree of trust and confidence that I could have in my NCOs and soldiers. They did what was asked of them, and they did it well.”
Hackett’s most potent memory of his first campaign in Afghanistan is when four soldiers in his company died when the Canadians were mistakenly attacked by an American F-16 near Tarnak Farms in mid-April of 2002.  Sgt. Marc Leger, Cpl. Ainsworth Dyer, Pvt. Nathan Smith and Pvt. Richard Green were the names of the soldiers killed.
“After the Tarnak Farms incident the memory for me is one of sitting down with Col. Pat Stogran. He was very much a leader who had been in a difficult spots before. I just remember his example of having that conversation with me and saying you guys need to find some way of grieving and being able to move on and deal with this loss. I remember two of the soldiers in my company came up with an idea to build an Inukshuk, which was a uniquely Canadian representation of not only the fellows we had lost, but other coalition casualties that had been lost serving alongside us during that time. That Inukshuk, in some way, shape or form, continued to stand all through Afghanistan mission. It became something way larger than just that particular incident and those particular casualties.”
Hackett looks back with pride on his soldiers who were able to commemorate their comrades, pick themselves up from their grief and carry on to achieve excellence in the mission.
“We achieved quite a lot,” says Hackett with obvious pride in his voice. “I think if anything we left an indelible mark on both on our allies and on the country for our ability to project and go off to a distant land under very austere conditions. We weren’t an arid pattern (camouflage), but in the green we wear now. We were able to adapt quickly and integrate into an allied force, use their helicopters to get out and get around and do the mission. We just brought a level of professionalism and focus which was truly great to be part of.”
When Hackett looks at his Bronze Star today he takes more pride in the achievements of A Company than his own.
“I was awarded the Bronze Star in the heels of that first tour when much of the Canadian leadership and the sniper community were recognized for their actions throughout the tour. I was representative of A Company’s contribution to the missions, but there were lots of well-earned recognitions for that tour.”
Lt. Col. Hackett, who went on to serve again in Afghanistan in 2009 and as CFB Suffield base commander after the war, is now stationed at the Canadian Army Doctrine and Training Centre in Kingston. He says Remembrance Day has taken on a new and special meaning for him since his time in Afghanistan.
“The continuum hasn’t changed, but Canadians grew up thinking of veterans as more older folks that lived through conflict in a distant time. In actual fact there are veterans right now who are half my age who have been through some traumatic occurrences, they have been disfigured potentially, they are carrying difficult memories with them. It is important Remembrance Day bind the people to it military. They don’t have to share its convictions; they just have to understand folks have elected to serve. And they serve everybody; both those who agree and those who disagree.”