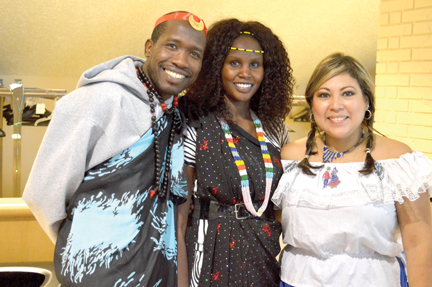 By Tim Kalinowski
Medicine Hat College held its annual International Trade Show Nov. 18 to help showcase the diversity of the Medicine Hat community and area and celebrate International Education Week. A great variety of cultures were on display with traditional garbs, international flavours and crafts, and plenty of interesting information on the various countries represented at the Trade Show.
Anas Naeem was one of the most enthusiastic bolsterers of international culture present proudly holding up a flag for his native India and showing off a diversity of traditional craft products. Naeem said he was proud of his home country, but also proud to be in Canada alongside so many others who have come here from the four corners of the globe.
“Today there are lots of people are sharing cultural things and bringing cultural things and foods. They are here to represent their culture. This happens once a year and it is very good to make people feel welcome and for Canadians to get a good knowledge of other cultures. I think the more we get to know each other’s cultures the more good things we will be able to build in the future for Canada and whole world,” said Naeem.
Imelda Bernales was one of four participants representing the Philippines. She wore a beautiful, traditional dress of her country and greeted everyone who came to her table with a big smile on her face.
“It is important to have a day like this to have a bonding with other countries,” said Bernales. “And to expose people to our culture, dress and other things.”
Ahmed AL-Sammarrain was handing out traditional Arabica coffee samples from his home country of Iraq. He said despite the recent attacks, and the way some Canadians have been talking about Muslims, he felt strong support from his fellow MHC students and the Medicine Hat community in general during International Education Week.
“I like everything here today because in Canada there is many cultures. When I first came here I saw so many different cultures. I don’t care about what some people are saying right now about Muslims. In every country there are some bad people and some people good. I know that.”
AL-Sammarrain said he has learned since coming to this country why Canada is so strong and successful in the world; it’s because of the strength represented by its wonderful diversity of peoples.
“I am feeling good today with a lot of support. Today shows me that everybody belongs. That’s freedom.”