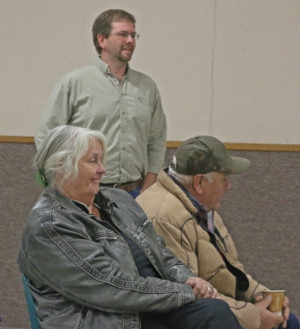 By Jamie Rieger
Concerns over Bill 6, the Enhanced Protection for Farm and Ranch Workers Act, dominated the discussions at the town hall meeting with MLA Drew Barnes, held in Bow Island on Saturday afternoon.
Bill 6 passed third reading in legislature last week, despite pleas from across the province urging the Notley government to slow down, do the proper consultations, and not to ram the Bill through in haste.
Barnes said the Wildrose Party tried several ways to slow down the process, to no avail.
“We asked for several amendments, we asked for it to be killed, to go to committees and discuss the bill. Every single way failed,” said Barnes. “After being unsuccessful, our last effort on Wednesday to ask for a hoist, basically for them to bring it back in six months, failed too.”
Following tremendous backlash to the Bill, the NDP government made a few amendments, including exempting family members from WCB and OHS regulations, which passed last Monday. The new rules go into effect on Jan. 1 and farmers and ranchers have until the end of April to get an account with WCB.
Farmers and ranchers have been vocal about not being opposed to safety regulations, but are opposed to the way the NDP went about it, with little or no consultation with producers and with pushing the Bill through Legislature, and working on amendments after it passed.
“Rachel is on record several times about how broken WCB is and now she is pushing it on the farmers and ranchers,” said Barnes.
Josh Klassen, who farms north of Bow Island, has two full-time employees who he said are both opposed to the legislation.
“Without a doubt, they are opposed. This bill is unfair to the industry and to the workers themselves. The guys on our operation are immigrants, but they share the same values we do. They are in the same position our families were in years ago,” said Klassen, who asked Barnes who they can now move forward.
Barnes told the group he will be continuing to gather feedback from constituents and will take the information back to Edmonton when Legislature reconvenes on Feb. 9.
“My job is to make sure she has all the information to get it right. I will carry forward the information, so the NDP can get it as close to right as possible.”
Garry Procter, who attended the town hall meeting, said the Wildrose Party needs to go further than that.
“We have to keep our party strong and they don’t care how much this will cost you. We need to tell them that we will get it right. You can’t drop your guard for one second,” said Proctor.
Local producer, Dale Thacker said the farm workers need to be represented at meetings and have their voices heard, as well.
“How many here are paid farmers? This is self-serving. The trouble is we need to have both sides here. It is important to have farm workers represented at these meetings,” said Thacker.
Dan Mehlen from Foremost has attended several of the Bill 6 meetings and rallies held around the province.
“When the Bill passed, the wind was taken out of our sails. When have we seen such an outcry? The way they have gone about this is wrong,” said Mehlen. “And I have heard of guys who are scared right now. Who will be able to afford this? We do everything safely. There are so many questions left to be answered like cleaning our bins or welding in our shops.”
Linda Christiansen, executive director for Safety City, which provides farm safety programs in schools throughout the region, was also in attendance at the meeting and encouraged producers to keep the pressure on the NDP government.
“There is value in keeping the pressure on Notley,” she said. “They are forcing you to belong to a system that does not work. Keep yelling, keep walking with your placards, and I will walk with you.”
Christiansen added that Safety City applied to the NDP government for grant funding for the Farm Safety program and were turned down.
In regards to having the legislation take effect as of Jan. 1, one member of the audience asked how they could do that if they don’t know what lies ahead with more amendments down the road.
“You can’t just send your money in and you don’t even know what the rules are,” he said.
Barnes responded, “That’s why we told them to take some time with this. We have a situation where a bill could greatly affect our lifestyles and as of Jan 1 the WCB portion takes affect.”
Barnes encouraged people to write letters and emails to the government and to contact his office with any further concerns or suggestions.
“I hope to have as much input from Albertans as possible. This needs to be done with local, experts involvement, the moms and dads who operate our farms and ranches,” he said. 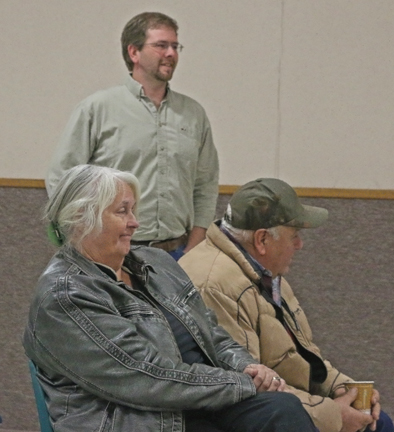 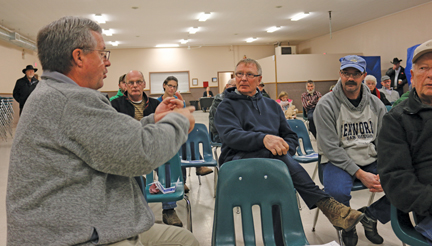 Dale Thacker, a Bow Island area producer, talks to the group about making sure the farm workers are included in Bill 6 discussions.