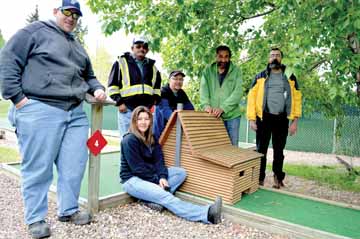 Photo by Tim Kalinowski- Venturers Society members (pictured, from left) Chuck McDonald, Sonia Gretchen, Brian Dodds, Paul Avery, Dwayne Mastel, and Bruce Wagner show off the replica of the old Cypress Hills NWMP barracks at the Lakeside Mini-Putt. The crew is going to be creating all new features for the putting holes, each based on a real Cypress Hills location, past or present.

By Tim Kalinowski
The Venturers Society of Medicine Hat is now in its 12th year in southeast Alberta. The program has proven itself to have legs in the area for one simple reason: It works. It gives locals with developmental difficulties a chance to contribute to the community and work outside with their friends. Based in the Cypress Hills, the Venturers Society members are jacks of all trades who have done a lot to enhance the quality of life in both the park and hamlet of Elkwater.
“There are so many things to do in the park that we just so many times don’t get to with our staff,” explains Cypress Hills district conservation officer and local Venturers Society board member O’brien Tarnasky. “The guys here are pretty much willing to do any job… They also help out during special events like History in the Hills and the Mile High Tri.”
Tarnasky says the program has been warmly embraced by the entire Elkwater and park community, and its members are considered fantastic local citizens.
“This program benefits everybody. And it’s so nice to see the guys engaged and enjoying the park, and working in an outdoor environment. In Cypress it’s special here because we do have the Elkwater townsite; so they are doing things for the community as well. They are not just helping park employees, they are helping a lot of organizations.”
Tarnasky, who was instrumental in helping the local chapter get started in 2004, goes on to say while the nine current participants all have their personal challenges, no one should ever think of them as having “disabilities” in the broader sense.
“These guys have abilities,” he states firmly. “They’ve got tons of abilities. They are a bunch of special guys who give all that they can. They are going there to help, and they bring lots of laughter out there with them. They have become my friends, and they are friends with many of us out here in the park.”
Sonia Gretchen is one of two project leaders who help the Venturers with their work in the park. She and fellow leader Paul Avery pick up the guys every day in Medicine Hat and ferry them out to the park to start their day.
“Every day they get up, get dressed, come out to work and help out in the (park) community,” she explains. “The Venturers Society is a non-profit organization, but these guys are getting up every day and going to work. I think the program is important because a lot of these guys don’t have the opportunity to find employment in town, and it gives them something to look forward to every day.”
Avery became a group leader just this past April after many years working as a conservation officer in the park. He says taking up this new position with the Venturers was a tremendous opportunity he couldn’t pass up.
“It’s a chance to be in the outdoors with the fellows,” he explains. “And a big part of the program we say is ‘nurturing through nature.’ And that’s some of the passion I bring to it too, the outdoor interests, and to teach these guys those kinds of skills, and other things they can use in their own personal lives.”
Medicine Hat Venturers Society founding member Chuck McDonald says he enjoys working with the two leaders and being part of the larger park community in Elkwater.
“I like to be outside and being with my friends, and whatnot so… The work is not too bad. I like meeting with the people in the community and stuff. People always say thank you for your work, and that makes me feel good.”
The nine local Venturers are split into two work teams. McDonald is a member of the “Dire Wolves,” which started in 2004. The other team is called the “Badgers,” which started up a year later in 2005. If you ask McDonald, he is in no doubt as to which team is better.
“Dire Wolves are better,” he says  with a laugh while Badgers members disagree loudly in the background, “because we started in ‘04. That was the name we came out with when we first started. We have more experience.”
Despite the friendly competition sometimes between the two teams, at the end of the day, the Venturers are all great friends. Many of them have worked together for over a decade now.
“I think they really have become an important part of the Elkwater community, the park and all the different special events that go on around here,” says Gretchen.
Those interested in meeting the local Venturers can see them in action doing a “teepee pole stripping” demonstration during “The History in the Hills” event between May 31-June 3 at the park. Besides their usual summer tasks, the Venturers are also taking over the complete renovation of the mini-golf course. They are hand-making whole new locally themed obstacles for park goers to enjoy.