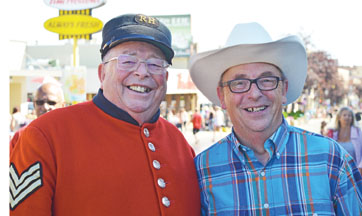 Photo by Tim Kalinowski HAPPY TO BE IN SCARLET: Chelsea Pensioner Simon de Buisseret, pictured here with brother Phil who lives in Redcliff, got British ex-pats’ hearts stirring during the Medicine Hat’s Stampede Parade on Thursday. Chelsea Pensioners are revered in Britain and are closely linked to Royalty.

During the Stampede parade last Thursday, the crowds gathered along 3rd Street SE to watch the floats go by. Near Madhatter Coffee Roastery and the CIBC Bank on the corner most in the crowd were excited to be out watching the colourful displays go by, but for a small group of English born Hatters on hand they only had eyes for a portly man in a Scarlet uniform, a black peak cap with sergeant stripes on his arms.

Who was this strange celebrity, looking jaunty, rosy cheeked and smiling? Curiosity had the cat by the tail.

It turns out there was a Redcliff connection to this puzzlement. Sitting beside the gentleman was Phil Buisseret; this made the public approach easier. The man in scarlet was Phil’s brother Simon, and he was a Chelsea Pensioner.

For our Canadian readers who might not know what a Chelsea Pensioner is, they are group of retired army veterans without dependents who live together in a regimental brotherhood at the Royal Hospital Chelsea in London (an architectural wonder designed by the same man who built the world famous St. Paul’s Cathedral, Sir Christopher Wren). Much like our Canadian Mounties, they are called upon to make public appearances at every major event in the British Isles, and are especially favoured by Royalty. The Chelsea Pensioners were founded in 1692 by Charles II during the Restoration period and were modeled after the Hopital des Invalides in Paris. The idea was the Crown wanted to provide care for wounded veterans without families to support them. The Chelsea Pensioners have evolved from that time to take on a large ceremonial role in British life.

Simon has been a Chelsea Pensioner for the past couple of years, and they literally saved his life. For decades he had been caring for his ailing wife Margaret, who was battling a rare kidney disease. Being her primary caregiver, he was unable to work consistently. He eventually ended up in the civil service as an armoury and weapons magazine manager with the military. In his youth he had spent ten years in the army as an army aircraft tech. He worked primarily on Beaver aircraft. (He jokes he had been known as the “Beaver King”). He had also served alongside British Special Forces as a machine gunner on a Scout helicopter in Oman’s “Secret War” in 1971.

As he wife’s health continued to decline drastically, and stress levels at work skyrocketed, Simon sought a way out.

“It all got to be too much,” remembers Simon. “My wife was too ill. It was horrendous. I ended up with a 9 mm pistol in my mouth. I told my GP (doctor). He said that’s it son, you’ve had enough. And I left the civil service.”

A few brief years of happiness ensued as Simon was able to get a double pension for his military service and his civil service. He started his own business GPS micro-chipping items, livestock, rare antiques or expensive machines, which people did not want stolen. He bought a three bedroom house with an acre of land, and lived the life of a mostly retired country farmer.

“I had goats, rabbits, Guinea pigs, hens, geese, ducks. I had a horse at a livery just down the road, a horse and carriage… I was happy as Larry there. And then I had to pack that up because I had heart failure. I had to have a triple heart bypass, and they put my wife in a home because she couldn’t look after herself. She was on a kidney machine for years by then.”

Facing a loss of purpose in his life, lonely, with his wife living far away in a special care home where she was no longer physically or financially dependent on him, and unable to take care of his dream country home due to his bad heart, Simon was once again heading toward despair.

It was then he saw an ad in the paper for the Chelsea Pensioners. After going through the interview process, Simon was accepted as a Pensioner and moved into the Royal Hospital Chelsea in London.

“I love it,” says Simon. “I love the clapping, the cheering, and the meeting of people. I have met wonderful people; John Clease, lots of TV stars, and lots of Royalty. I have met Princess Anne, the Duke of York and others. We are always in uniform when we live inside the hospital. You are expected to be. That’s part of the military ethos. You stay in uniform. Even though we are retired from the military, there is great feeling of being in a regiment there.”

With the Chelsea Pensioners, all Simon’s physical needs are taken care of. His military pension gets put into a pot with the 320 other Pensioners who live on site to pay for their collective upkeep. There are special ceremonies to learn, light regimental discipline and lots of public engagement and opportunities to do good works.

Phil says he is so proud of his brother Simon, and is thrilled to see him get so much recognition, even in Medicine Hat, while wearing his Scarlet.

“They are just really respected because they are veterans. Everybody knows they are veterans, and they appreciate what they have done for the country and sacrifices and the volunteering. It’s a way the British public can show their appreciation for what they’ve done.”

On a more personal level, Phil is grateful the Pensioners have given Simon a supportive environment as he enters his elder years, especially since his wife Margaret has now passed away.

“I am so proud, and I am happy that he is looked after and we don’t have to worry or be concerned for his welfare. We always were before he joined the Pensioners because we always knew he was alone for the last few years.”