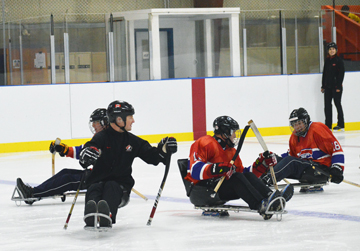 By Tim Kalinowski
Soldiers at CFB Suffield and BATUS showed off their athletic skills as well as their big hearts at a fundraising season kickoff event for the United Way of South East Alberta at the Ralston Arena last Thursday. Event organizers also decided to add in a little bit of an awareness building activity as part of the fundraiser to spread the message of employment equity for people with disabilities by playing a game of sledge hockey. Lt. Col. John Scott, base commander of CRB Suffield, explained further last week.
“As far as employment equity, the Department of National Defence is encouraging that type of diversity,” he said. “This event today is giving military folks an opportunity to experience being in a limited mobility environment. So basically on a sledge, rolling around the ice. Fortunately we have the national women’s coach (Terra Chisholm) here from Team Canada to encourage us and laugh when we make mistakes and fall over. We are also fortunate to have an (Olympic) gold medalist here from Team Canada, and he (Derek Whitson) will show us his game. So it is a combined event, both fundraising in support of the United Way as well as recognizing diversity at National Defence, and how we need to understand diversity to embrace it.”
The game was also a friendly competition with NCOs on one side and officers on the other. Neither side looked too graceful at first as most had never played sledge hockey before. Derek Whitson skated around encouraging the soldiers who struggled to maintain their balance in their sledges at times, and found themselves floundering on the ice to get back on top of their skates. However, as the game progressed the soldiers grew more comfortable and the level of competition noticeably increased as well.
Whitson said he appreciated the fact that the soldiers were willing to put their dignity on the line to help spread awareness of employment equity.
“It’s awesome. It keeps you humble because seeing these guys go out, and they crash and bang and they are playing for the love of the game out there with their peers. It’s not about doing a job. It’s nice to be able to just play hockey and fun with it. It’s lots of laughs.
“It is definitely going to help get the word out to anybody who wants to play this game in Medicine Hat. It’s just awesome they are putting the word out for us today,” he said.
Chisholm said she had been fortunate to work with Canadian soldiers before, and had been treated fantastic.
“These guys wear their hearts on their sleeves for everybody,” she said. “If you had someone with a disability around, you know they would do anything for that person. It makes you feel so appreciated that they would give wahtever they could to that person to make sure they had a great day. We’ve always had that experience out here.”
Local United Way executive director Missy Fandrick was also on hand for the game. She was more than happy to see the base use sport as a means to help her organization kickoff their fall fundraising season in south east Alberta.
“We usually do a pancake breakfast for it, but today we are playing sledge hockey, which is way better,” she said. “It’s supporting another charitable cause as well, and it just shows working together and supporting everybody; not just us, but other groups in our area that could use some help. And it is more interactive, like a social, where we can all kind of chat and talk about things other than United Way, and get to know each other on a more personal level. You can’t beat hockey!”
Fandrick was grateful to CFB Suffield and BATUS for their ongoing support.
“We’ve had a longstanding campaign relationship with the base. Bases are huge supporters of the United Ways across Canada, but (CFB Suffield) extremely supportive to our local United Way.”