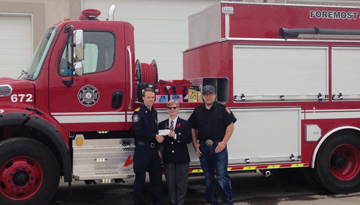 By Jamie Rieger
On the last Friday of October each year, Canadians start to proudly pin a bright red poppy onto the lapels of their jackets as a way to show their respect for our fallen and serving soldiers. Since 1921, the poppy has been used as a symbol to honour and remember those who have paid the ultimate sacrifice.
Partly inspired by Lt.-Col. John McCrae’s poem, “In Flanders Fields”, the poppy became a significant part of Canada’s Remembrance Day ceremony and over the years, a part of Royal Canadian Legions’ fundraising efforts. As a result, the poppy was officially adopted by the Great War Veteran’s Association as the Flower of Remembrance on July 5, 1921.
Over the years, an annual Poppy campaign has been held as a way for local Legion branches to collect donations that go toward assisting veterans and help local organizations.
Last week, Bow Island Royal Canadian Legion member, Terry Maxwell distributed poppy boxes to local businesses in town and will collect them again on Nov. 10.
“Money raised from the Poppy Campaign goes toward taking care of veterans’ needs and also some for local groups if we can,” said Maxwell. “We have rules and regulations for the Poppy Fund are limited to who we can give to.”
Following the wildfires in Fort MacMurray, Royal Canadian Legion branches from across the province were able to send money to their local Legion.
“We sent money to their Poppy Fund, but we have a book that tells us exactly who we can give money to,” he said.
Some of the items that money from the Legion Poppy Fund can be used for include:
-Financial assistance and support to Veterans, including Canadian Armed Forces and RCMP, and their families who are in need. Poppy Funds may also be used for:
-Grants for food, heating costs, clothing, prescription medication, medical appliances and equipment, essential home repairs and emergency shelter or assistance
-Housing accommodation and care facilities
– Funding for Veteran Transition Programs that are directly related to the training, education and support needs of Veterans and their families
– Comforts for Veterans and their surviving spouses who are hospitalized and in need
-Veterans visits, transportation, reading programs and day trips
– Accessibility modifications to assist Veterans with disabilities
-Educational bursaries for children, grandchildren and great-grandchildren of Veterans
-Community drop-in centres, meals-on-wheels, and seniors services in communities where Veterans would benefit
-Community medical appliances, medical training and medical research which will assist in the care of Veterans in the community
– Support the work of Legion Command and Branch Service Officers across Canada in assisting and representing Veterans
-Donations for relief of disasters declared by federal or provincial governments which impact Veteran in those communities
-Promotion and administering of Remembrance activities to ensure Canadians never forget the sacrifices of Canada’s Veterans
The Poppy Campaign is organized and run by local Legion volunteers at over 1400 branches across Canada and abroad. Poppy Funds are held in trust at every level of the Legion and the use of these trust funds are strictly controlled, with appropriate approval processes. Branch executives are accountable for Poppy Fund expenditures and are required to inform the public through local media of the results of their campaign, including contributions received and disposition of funds. You may contact your local Legion branch to request information on their Poppy Campaign.
-With files from the Royal Canadian Legion