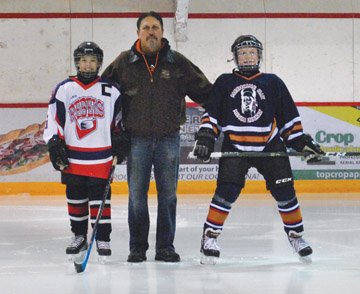 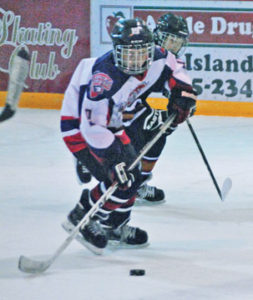 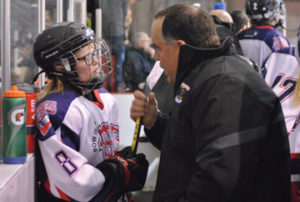 By Jamie Rieger
The Bow Island/Foremost PeeWee Rebels played a hard fought game against Bow Valley in the bronze medal match on Sunday afternoon, but ended up finishing in fourth place in a 7-2 loss.
Eight teams from southern Alberta vied for the top prize at the 29th annual Curtis Kerner Memorial PeeWee tournament over the weekend and it was Medicine Hat Tazmaniacs who won the tournament in a close battle with the Lethbridge Bandits. Final score of that game was 5-4.
The visiting teams were impressed with the organization of the event, according to manager, Melinda Mastel.
“Many teams commentated on the great organization of the tournament. They also had many positive comments about our young Bantam/Midget refs doing a great job,” said Mastel.
Participating teams in the tournament included: The Rebels, Bow Valley, Lethbridge Hype, Lethbridge Warhawks, Medicine Hat Canadiens, Medicine Hat Oilers, Medicine Tazmaniacs, and the Lethbridge Bandits.
The Curtis Kerner Memorial PeeWee tournament is held annually to remember the local man who was heavily involved in minor hockey in the community.
The tournament allows the family and the community to remember Kerner who died in a tragic trucking accident.
“This is one way for us, the family and the community to remember him,” said Kerner’s brother-in-law, Dale Hurt. “The accident was tragic, but we have this tournament now to remember him.”