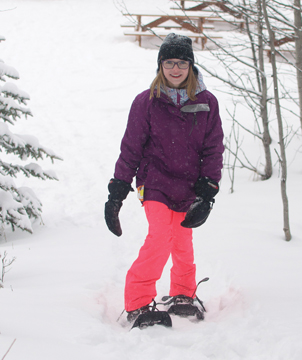 Photo by Justin Seward- More than 500 people came out to enjoy the third annual Elkwater Winter Festival on Feb. 4. Kids were able to participate in snow-shoeing, skating, face painting, and learning how to ice fish.

By Justin Seward
It’s shaping up to be another great winter season at Hidden Valley Ski Resort and so much so that Cypress Hills  Provincial Park has seen increased numbers  on the hill.
According to Cypress Hills Provincial Park Head of Visitor Services, Mike Ractliffe, by winter’s end they will expect 20,000 skiers in the park, which will  exceed the 16,000 mark from last season.
The main draw of people come from Medicine Hat but the park sees visitors from Calgary, Edmonton and Saskatchewan.
“It’s very simple for us to be appealing to people from Regina because we’re the biggest ski hill between here and the Rockies,” said Ractliffe.
“The snow conditions will always be good for them. We’re just not a standalone resort, we have other activities to do such as cross country skiing, snow shoeing, the luge, skating trail and other family activities at the visitor centre. It’s a much better family oriented resort.”
He said the increase in skiers began to peak before the Christmas holiday because they were able to make enough snow to get the hill open and the cold spell in the new year didn’t dampen the spirits of the park goers.
“It didn’t effect attendance at the ski hill,” said Ractliffe.
“You tend to fine the most people who are into winter sports understand that you’re going to get colder temperatures. We do sometimes get an inversion, which means it could be 10 degrees warmer here than it is in town.”
The hill got a fresh blanket of powder last weekend and many skiers and snowboarders flocked to the hill to enjoy the conditions.
“It’s great out here,” said Carson Pancoast, who has been coming out to the hill from Medicine Hat since he was six years old and now 28.
“I like that they’re putting some new obstacles on the course like on McGee they have some rollers and a couple of snakes and they changed the park up quite a bit.”
Ractliffe mentioned for improvements, they’re always open for discussion to make the resort more family friendly and upgrading their older equipment but it’s a surprise for what’s in store next year.