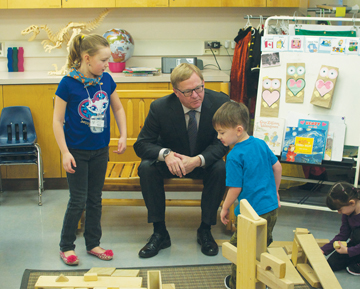 By Justin Seward
Alberta Education Minister David Eggen made his first stop on his  Southern Alberta school tour at Redcliff’s Isabel F. Cox School on Feb. 9, taking  a student led tour of the school with the purpose of seeing where schools stand in terms of the 2017 budget and the nutrition programs that are available to the students.
Eggen addressed the underfunded bus transportation in the rural areas and that he is learning about this more as he moves around the province.
“We want to make sure the transportation budget is sufficient,” said Eggen.
“We travel the equivalent of around the world several times with provincial buses. I want to make sure we have an updated transport system and that it’s properly funded and meeting the needs of kids. That’s a big reason why I’m down here today.”
Others topics that arose were teacher negotiations and Eggen said they are going well for the first time doing the bargaining on provincial scale and hopeful there will be an agreement in place in the near future. Additionally,  he credits the teachers in the province for putting the kids first and they have a clear understanding of the economic circumstances and province is looking into more teaching opportunities.
Grade 3 student, Maren Cochrane, had the chance to walk Eggen around the school and said it was fun because she likes being a tour guide and was able to build on what she learned from staying around for parent teacher interviews.
Principal Melissa Gogolinski said it was important for students to have Eggen visit because it allowed them to practice their leadership roles in becoming tour guides.
“When the Minister of Education is visiting, it’s like royalty” said Gogolinski.
“They’re learning confidence, how to speak in public, how to introduce themselves to people and shows general awareness of the building.” 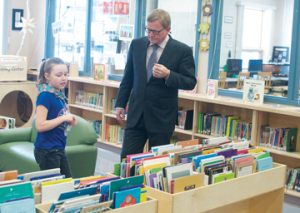