Sound science, common sense, and education needed when it comes to SARA 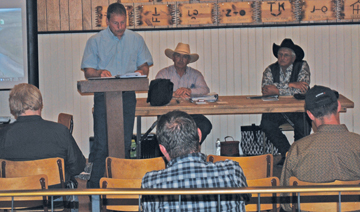 Photo by Jamie Rieger - Ross Ford, reeve for the County of Warner makes a presentation at the Sustainable Canada AGM. Ford told the crowd that the government is taking a backwards approach when it comes to the Species at Risk Act.

By Jamie Rieger
Municipalities, organizations, and landowners need to band together when it comes to dealing with the Species at Risk Act, according to one municipal leader whose county has several species currently on the protected species list.
Ross Ford, reeve for the county of Warner told those in attendance at Sustainable Canada Inc’s annual general meeting in Manyberries on May 31 that the federal government is taking a backwards approach when it comes to the Species at Risk Act. He and County of Forty Mile reeve, Bryne Lengyel recently took their concerns to other municipalities, in part to raise awareness.
“Bryne and I tried to bring awareness to our municipalities about what is happening down here,” said Ross. “The federal Liberals have gone out on this Act and municipalities are surprised by what is happening.”
Much of the problem, he said was that the federal government has put the horse before the cart with Species at Risk.
“They have to respect our economy. Their actions need to be based on common sense and sound science. They need to do the science first. Research before listing a species. The whole science behind the Species at Risk Act is relatively new and the numbers suggest not enough has been done,” said Ford. “The Act itself, in most cases, is there so they can access funds to do the research. They need to change that. The research needs to be done before an animal is listed. A dozen municipalities are now being impacted by this Act and in Warner, we have a number of species that have been listed.”
Another issue that municipalities need to be concerned about is recent policy changes regarding SARA.
“There are socio-economic effects with this legislation. We are making some headway. We read the resolutions from the AUMA and have sought legal council on a number of the policies,” said Ford. “The Feds have developed a number of policies regarding the SARA that affects private land, structures, and conservation agreements.”
In his report, Sustainable Canada president Randy Stokke talked about the need for accurate science and his working with transboundary groups in land and conservation issues, as well as the Species at Risk Act, and Emergency Protection Order (now named Critical Habitat Order) on the Greater Sage grouse.
“We don’t need them managing our land for us, but landowners need to be provided with accurate science,” said Stokke.
“There are over-reaching implications when it comes to property rights and changes are needed to the Act and the public needs to be properly educated,” he added.
Stokke also told the group of County of Forty Mile reeve Bryne Lengyel and Ross Ford, reeve for the County of Warner recently addressing representatives from other municipalities about the Species at Risk Act, property rights, and how municipalities can work together
Tim Romanow from the Milk River Watershed Council gave an overview of his organization and their current projects.
“We are working with municipalities on weed management and have been doing a study on groundwater quality,” said Romanow.
The study involves a full-chemical study, including hydro-carbons, of 10 wells in their region.
He also indicated that they will be having a staff member at Writing-on-Stone Park this summer to educated visitors on the Milk River watershed and stewardship.
Romanow also said the Milk River Watershed council would be willing to work with Sustainable Canada on initiatives and projects.
James Hargrave, from the Alberta Grazing Lease Association presented a comprehensive look at proposed changes to grazing disposition rental rates and assignment fees on agricultural public lands. (See next week’s Commentator for a separate story.) 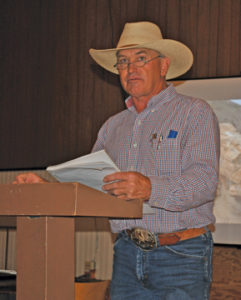 Photo by Jamie Rieger – Keith Reesor goes over agenda items at the Sustainable Canada AGM, held in Manyberries on May 31.